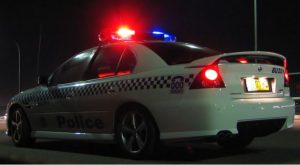 Two people have been charged after weapons were allegedly located during a vehicle stop in the NSW south west slopes.

About 11 pm Sunday officers from Riverina Police District were patrolling the Gundagai area when they stopped a blue Holden Commodore.

Following a search of the vehicle, officers located a steel pole with a blade attached to its end concealed under the driver’s seat, cannabis, drug paraphernalia, meat cleaver, machete, knives and a sawn-off rifle.

The driver, a 31-year-old man, and his 17-year-old male passenger were arrested and taken to Wagga Wagga Police Station.

The 31-year-old man was charged with possess or use a prohibited weapon without permit and contravene prohibition/restriction in AVO.

He was refused bail and was due to face Wagga Wagga Local Court on March 16.

He was granted strict conditional bail and is due to face a children’s court on Monday, March 23.

Canberra man found with drugs and weapon at Nelligen

A 47-year-old Canberra man, whose car was stopped by police on the Kings Highway at Nelligen on the weekend, has been...
Read More

A Moruya man is to face court today charged over his alleged possession of two shortened firearms. The 31-year-old was...
Read More