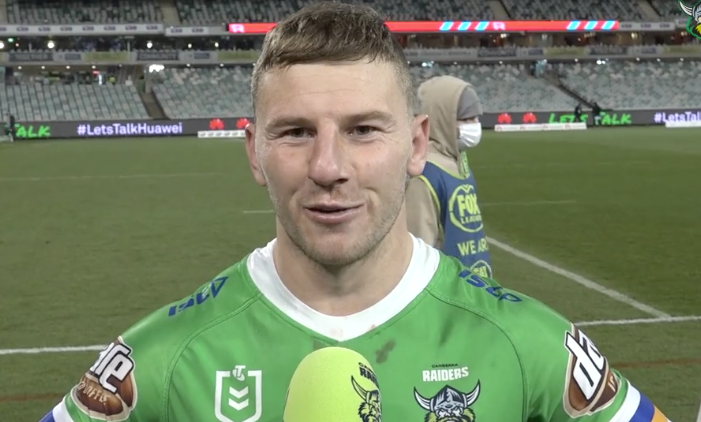 George Williams has been released by the Raiders to return to the UK. Photo: Supplied.

Rugby League people talk a lot about the importance of ‘the spine’ – the spine being the combined talents of the hooker, halfback and fullback.

In the Raiders glory years of 1989, 90 and 94, the spine was virtually unchanged and had an enormous influence on the team’s success.

In 1989/90, Steve Walters was the best hooker in rugby league. His combination with halfback Ricky Stuart was second to none, and Stuart was one of the greatest tactical halfbacks the game has seen. Ricky Stuart: Raiders coach and one of the greatest halfback the game has ever seen. Photo: Raiders.

Combine the brilliance of Walters and Stuart with the attacking talents of Garry Belcher at fullback and the Raiders spine was the best in the competition. It was reflected in the trophy cabinet.

In 1994, Stuart and Walters maintained their partnership with Brett Mullins at fullback, replacing the retired Belcher.

Again, the combined influence of all three can’t be underestimated.

At the moment, the Raiders spine is looking fractured – made worse by injury, suspension and homesickness.

George Williams’ departure became messy as he basically told the club he was leaving no matter what. Rather than demand he fulfils his contract and plays, he was released by the Raiders.

COVID-19 proved to be the tipping point as he and his partner couldn’t travel back to see their families in the UK. It also prevented their families from visiting them in Australia.

That’s the start of the Raiders’ problems.

Fullback Charnze Nicoll-Klokstad is out for much of the season with a neck injury while hooker Josh Hodgson has been in and out through injury and suspension.

Without a quality spine, the Raiders won’t win a premiership.

The key now is to recruit the right personnel in the knowledge that it could take a couple of years to return to a semblance of the side that made it through to the Grand Final in 2019.