The next step in the Eurobodalla’s local food economy. Have your say here! The popular SAGE Farmers Market each Tuesday from 3 in Riverside Park, Moruya. Pic from SAGE Facebook.

The Eurobodalla food economy is pushing forward – like a pumpkin vine that sprouts from a compost heap.

“They need more avenues through which to sell at a high enough margin to keep doing what they’re doing.”

In recent years, the river town of Moruya has seen increasing numbers of market gardeners, spurred along by the community of people around the SAGE Farmers Market.

Shoppers gather like sprinters in the 100-metre race at the Olympics each Tuesday afternoon at 3 in Riverside Park waiting for the bell to ring – a signal that sales can start.

“It’s a movement whose time has come.”

The river flats and volcanic soils of Moruya have a proud agricultural heritage that in their day supported large numbers of vegetable, dairy, and beef growers. For whatever reason, those practices all but died out but there is a growing sense ‘that day’ has come again.

Since 2009, when the community organisation Sustainable Agriculture and Gardening Eurobodalla (SAGE) started working towards its mission of ‘growing the growers’, locally grown food has become easier to access.

The award winning farmers market that has been the backbone of the SAGE initiative has created an appetite and an industry that requires more. 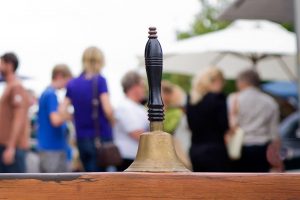 The bell that signals a start to trading each Tuesday in Riverside Park. Pic from SAGE Facebook.

“A farmers market once a week can’t service everyone who wants to eat locally grown food and local farmers need to reach more customers,” Kate says.

An increasingly common sales avenue for farmers around the world is to sell their products through what is known as Community Supported Agriculture (CSA).

A CSA is a farm share program, where the consumer and the farmer enter into an agreement of goodwill to exchange money for food. Consumers pledge to purchase the anticipated harvest well in advance.

“A farmer can plan their crops with greater confidence knowing that they will sell what they grow and sell it at a fair price,” Kate says.

“By supporting the farmer in this way, the customer receives a box of fresh seasonal produce every week, delivered to their door.”

The idea springs from frustration with the dominant and most familiar food distribution system – the supermarket, which mostly excludes local and small-scale growers from their supply chains, leaving local farmers no option but to sell directly to customers. Moruya watermelons were a big hit over summer at the SAGE Farmers Market. Pic from SAGE Facebook.

Woven into the arrangement is a sense of shared risk between the farmer and the consumer, which takes the CSA model beyond the usual commercial transaction we are used to.

If the season is difficult or hit by extreme events, pickings can be slim which impacts the quality and amount of produce a customer receives in their weekly box.

Local Harvest in the USA lists over 24,000 family farms on their website who are part of a CSA arrangement.

Local Harvest believes the element of shared risk creates a feeling of ‘we’re in this together’.

Their website says, “Some CSA members may be asked to sign a policy form indicating that they agree to accept without complaint whatever the farm can produce.”

However, they say the idea of shared risk creates a sense of community between customers and farmers.

“If a hailstorm takes out all the peppers, everyone is disappointed together, and together cheer on the winter squash and broccoli,” the Local Harvest website says.

“Most CSA farmers feel a great sense of responsibility to their customers and when certain crops are scarce, they make sure the CSA gets served first.”

There is a yin and yang to that shared risk though. When the season is powering and a bounty or surplus of produce is created those involved with a CSA benefit.

In that situation, recipes are swapped to add some variety to the way abundant veg can be used in the home kitchen, that produce can also be preserved and used out of season.

Where a supermarket supply chain might struggle to cope with a surplus, the CSA model summons peoples creatively, extending the harvest and reduceing food waste.

As part of a Eurobodalla based group keen to establish the CSA model here, Kate Raymond says, “Consumers increasingly demand to know more about where their food comes from and how it was grown,” “Joining a CSA can answer their questions. A CSA connects the consumer to the grower in a very direct and transparent way,” she says.

To test the idea locally, a number of vegetable growers in the Eurobodalla are currently undertaking market research into the viability of establishing a multi-farm CSA program.

“This is significant, as it’s a symptom of a local food economy that is outgrowing the perception that local food is a niche enterprise and is in fact becoming a bona fide industry,” Kate says.

The next phase in the Eurobodalla’s agricultural heritage is well underway.

Click HERE to take the local survey and add your thoughts to the market testing that’s underway.