Yellow buoys off Merimbula and Malua Bay listening for sharks This summer, just below Batemans Bay at Maula Bay and further south at Merimbula, a tall yellow buoy beyond the last line of breakers will catch your eye as your bum finds that sweet spot in the sand.

It’s a Shark Listening Station or VR4G, installed during November before the place filled up with holiday makers.

The one off Main Beach Merimbula brings the number of listening stations along the New South Wales coastline to twenty, all designed to give our feeble bodies the jump on these ‘monsters of the deep.’

The Member for Bega, Andrew Constance says these satellite-linked VR4G receivers record the presence of tagged sharks swimming within 500 metres of the listening station.

“Information on the movement of tagged sharks captured on the VR4Gs goes straight to a satellite and is then instantly sent to mobile devices via Twitter and the SharkSmart App.” he explains.

There are 114 White Sharks and 88 Bull Sharks that have been tagged by either the NSW Department of Primary Industries (DPI) or CSIRO. These are the beasties that give themselves away when they swim near one of these hi-tech posts.

“Whilst we can’t tag every shark, the new listening stations will enhance bather safety by alerting beachgoers and authorities when a tagged shark is in the area,” Mr Constance says.

“They provide beachgoers with information and knowledge to help them assess their risk of a shark encounter before they hit the water.” 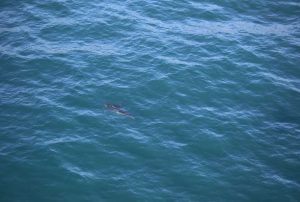 The technology is one component of the NSW Government’s $16m Shark Management Strategy and follows a run of fatal and near-fatal shark attacks in northern NSW during 2016.

Other parts of the strategy being seen locally include regular DPI helicopter patrols running between Kiama and Eden, and soon a new $33,000 viewing platform overlooking Pambula Beach.

Since the aerial patrols and listening stations became active seven local shark sightings have been reported to the Shark Smart App – all south of the Bega River mouth at Tathra.

The first alert on December 17 pointed to four Whaler Sharks near Bar Beach Merimbula, and two unidentified 2 metre sharks off Pambula Beach – both spotted by the DPI aerial team.

The most recent alert was sent out on December 29 with the helicopter reporting up to eight juvenile Bronze Whaler Sharks off Main Beach Merimbula.

In all cases, nearby authorities were notified and it was assessed that there was little threat to swimmers and surfers – sometimes simply because there was no one in the water.

If there is deemed to be a risk to people, lifesavers on the beach or the aerial patrol have the capacity to clear the water of swimmers.

Looking further north to the Shoalhaven, 13 shark alerts have been trigger during the same time frame around Ulladulla and Jervis Bay. On the Central and North Coasts, where there is a more intensive monitoring effort, 60 alerts have been issued taking in beaches between Lake Macquarie and Tweed Heads. 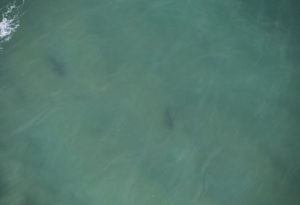 “Sharks are not the biggest risk to swimmers though,” Mr Edmunds says.

“Since the start of summer, we have had 18 deaths in New South Wales waters, none have been a result of shark interaction,” Mr Edmunds says.

“Unpatrolled beaches, rips and strong currents, not wearing life-jackets, unsupervised pools, ponds, and dams – these are the biggest risks.”

Mr Edmunds is hoping the listening stations might ease people’s concern about sharks.

“People will start to see sharks in the natural environment as normal,” he says.

“The frequency of the alerts will increase over time as more sharks are tagged, people might start to realise how commonplace sharks are.” The yellow VR4G units sit high in the water and have been somewhat of a curiosity to beachgoers this summer with lifesavers taking regular questions.

“Stand-up paddle boarders have also been going out and back to investigate,” Mr Edmunds says.

The odds of being attacked or killed by a shark are said to be 1 in 3,748,067, despite the regularity of their presence in our environment that Mr Edumnds points to.

Those long odds however, are easily challenged by our active imaginations, fed by frequent news reports from the North Coast pointing to surfers bitten or killed and White Sharks snared in drum lines.

The tall yellow buoys that now sit out the front of Merimbula and Malua Bay not only highlight the physical presence of sharks but also our fragile minds when it comes to these creatures.