Sea-foam: What is it? Can it make you sick?

The sea-foam that has enveloped the New South Wales coastline these past few days can seem irresistible.

Running through it you wish for some sort of “Charlie and the Chocolate Factory” moment, hoping to discover that the ocean has churned itself into marshmallow.

Laughing and carrying on with the kids and dog, you soon find yourself in the middle of the beach (cursing Charlie and his damn chocolate factory for even suggesting the idea to your repressed childhood imagination), surrounded by the stuff asking yourself two questions…

The 7 metre seas whipped up by the East Coast Low along the Queensland, New South Wales and Tasmanian coasts this week, created a huge washing machine that took advantage of the “natural detergent-like chemicals“ that sit at the surface of the ocean. Following similar weather in 2007 at Yamba on the North Coast of New South Wales, John Dengate of the NSW Department for the Environment and Conservation, was quoted as saying that sea-foam was a result of “plankton and other small sea organisms being literally pulverised against the rocks of the shoreline.”

Dr Karl Kruszelnicki from ABC Science explains that it’s this action that creates this natural detergent in the ocean.

The benefits to the environment are said to be increased food supply and higher reproduction success rates. Dr Karl explains that fish and water birds often feed on the nutrients and organisms found naturally within the foam and that in freshwater the foam can help the eggs and larvae of fish and frogs.

At Tathra on the New South Wales South Coast this week sea-foam pushed past the confines of the beach and took over the town’s commercial strip some 200 metres or more from the normal shoreline.

In some places it was five to 10 metres deep, pushing into the surf club and a beach side cafe. 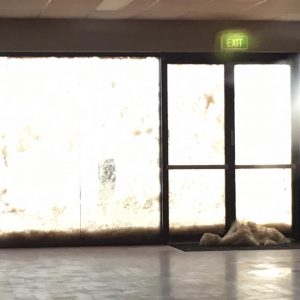 What took it to these heights was the extra hit of organic mater being washed into the ocean from creeks and rivers in flood, on the back of 300 to 400mm of rain.

Can it make you sick?

Dr Karl suggests that natural sea-foam “ain’t that bad,” and that there is a natural recycling of nutrients at play when the ocean whips up a batch.

It’s what comes down streams and rivers and mixes in with this natural process that you need to worry about. But perhaps the real game changer, the thing that makes mum yell “stop!” from the edge of the eroding beach, is poo.

Dr Barry Noller a toxicologist at the University of Queensland, told Fairfax Media this week, that a big rain event brings sewage and other waste water into the natural system, which then could become part of sea-foam.

Dr Karl explains that the foam can potentially infect humans.

He says bubbles in the ocean can carry viruses and when these bubbles make up foam and burst open, “they squirt the viruses into the air on tiny jets of seawater.”

Dr Karl believes these jets could expose humans to viruses, pathogens and toxins.

Some who have ventured into the foam this week at Tathra have come out reporting itchy skin, while there has also been talk of dogs getting lost in the stuff. Dr Karl also warns of the potential for young children to go missed and even drown.

But largely when it comes to sea-foam Dr Karl says “Worse things happen at sea.”

Are you ready to BioBlitz in Bega?! This weekend is your chance to get involved with this increasingly popular grassroots...
Read More

The ocean plays an integral part in why many of us choose to live on the Far South Coast of...
Read More