The freight line between Stockinbingal and Parkes finally reopened at 8 pm last night [Wednesday] following a collision between a train and truck near Bribbaree on Monday morning. 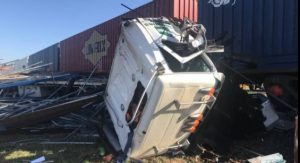 Investigations are still underway into the cause of the collision between a truck and a freight train near Bribbaree. Photo: NSW Crash Investigation Facebook page.

Everything came to a standstill just outside Bribbaree around 7 am Monday morning when a semi-trailer – travelling north west on Mary Gilmore Way about two kilometres north east of Bribbaree Road – collided with a freight train.

A container being carried by the train was dislodged and sparked a fire in a paddock on the north side of the rail line which was extinguished by the Rural Fire Service and Young Fire and Rescue.

Police are waiting for blood alcohol test before they take any action against the driver of the truck, a 24-year-old man from The Rock, south of Wagga. THe NSW Rural Fire Service and NSW Fire and Rescue were called to the scene to extinguish a small fire caused by the collision. Photo: NSW Crash Investigation Facebook page.

He was taken to Young District Hospital and was expected to make a full recovery.

Inspector Jacob Reeves of Young Police said the police didn’t have any indication that drugs or alcohol were involved.

“It’s just a standard practise for the testing to be done when someone has been hospitalised for an accident,” he explained.

The Australian Rail Track Corporation (ARTC) has reported around 800 metres of railway track was significantly damaged as a result of the accident and a temporary speed restriction would be in place until the full remediation works were completed.

The ARTC said roughly 20 freight trains had been impacted overall by the incident.

Two dead after train and B-double collide west of Young

Two men died yesterday when their B-double truck collided with a freight train on a rural rail crossing at Eurabba...
Read More