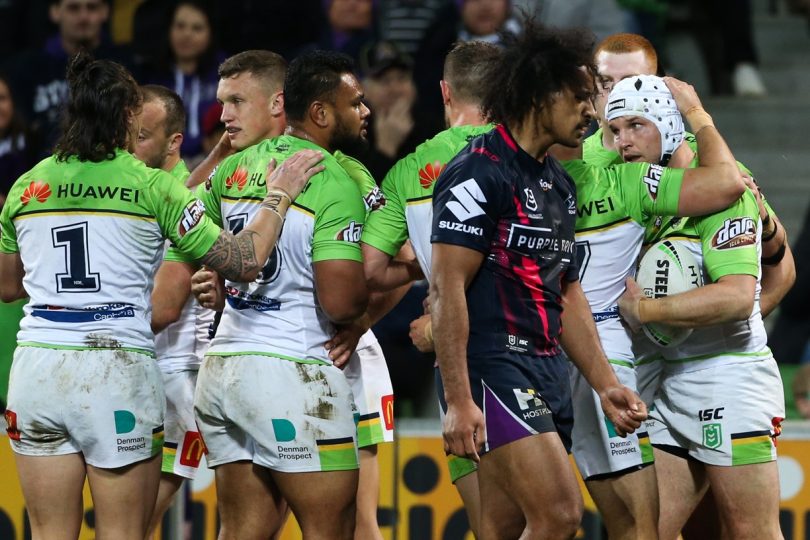 The Raiders come from behind victory over the Melbourne Storm was one of the greatest comebacks from a Canberra sporting team in living memory.

To beat the Storm in Melbourne is one thing, but to beat this team when down 18-nil, sapped of energy and having played 20 minutes of the first half with 12 players, is hard to believe.

The Raiders scored 22 unanswered points to win 22-18 and sent a message that this team is a genuine premiership contender.

So how does this performance rate alongside some of the great comebacks involving Canberra sporting teams and sportspeople?

To this day, head and shoulders above others, remains the Raiders victory in the 1989 Grand Final. Not only did the Raiders defy the odds to make the finals, they had to come from behind to defeat Balmain 19-14 after a John Ferguson converted try sent the game into extra time.

I would rank the Raiders come from behind win on the weekend against the Storm as possibly the second greatest comeback of all time by a Raiders team.

Raiders aside, there have been many memorable comebacks from Canberra sporting teams and sportspeople.

Michael Bevan’s performance in guiding Australia to victory in the one dayer against the West Indies on New Year’s Day in 1996 was one such occasion. Australia was in deep trouble at six wickets for 38, chasing the modest target of 173. Bevan needed to hit a four off the final delivery, and the rest is history.

Rob de Castella had to stage a remarkable comeback to win a gold medal in the marathon at the 1982 Commonwealth Games. With just a few kilometres to go, Deek trailed Tanzania’s Juma Ikanga by 80 metres. He summoned energy in the 100 per cent humidity in Brisbane to surge to the front.

The two men then exchanged the lead four times before De Castella went on to win by 80 metres.

Canberra cyclist Mathew Hayman won the gruelling Paris-Roubaix race in 2016. This is one of the hardest one-day races in the world. It covers a ridiculous 250 kilometre-plus trek over rough roads, including cobblestone, across northern France. Hayman won the race six weeks after suffering a broken arm. In the lead-up that season, his best result was 28th.

Fellow Canberra cyclist Chloe Hosking recovered from a bad crash prior to competing in the women’s road race at the 2018 Commonwealth Games. She ended up winning gold.

The UC Capitals finished eighth in the two seasons leading up to winning their first WNBL title in 1999-2000, with a Grand Final victory over Adelaide.

And the Canberra Brave won their first Australian Ice Hockey League title four years after the team emerged from the ashes of the Canberra Knights.

For the time being though, let’s just cherish the remarkable comeback by the Raiders in Melbourne. This is clearly a performance that will go down as one of the club’s greatest.

Can you recall a great comeback at a sporting event? Share your comments below.

The highs, lows and complexity of Canberra sport

Attempting to understand the vagaries of sport is often a challenging task. And anyone who is riding the wave with...
Read More