When Geoffrey Badger arrived in the Bega Valley from the Canberra School of Music, in 1996, there were no choirs or orchestras in the valley, and there hadn’t been since World War II.

Undaunted, Geoffrey decided that if he really wanted to be involved in music in the region he’d have to make it happen himself. So he set about doing just that.

Geoffrey has become a well known supporter of music in the Bega Valley, and his popular South Coast Music Camps have been taking place every year since 2008 – until 2019, when the camp was cancelled due to a lack of strings.

Anna had recently moved to Bega Valley and teamed up with another newcomer to the area, violinist Vanessa Vromans, to create and encourage music culture with the same drive and passion that Geoffrey had in 1996.

He’s has even joined them on a number of projects to create a formidable team, with the aim of building up the number of strings of the Bega Valley. Anna had been travelling to the South Coast Music Camps from Sydney since the early days, and in December 2020 she permanently moved to the region “just in time for the bushfires”, she says. She immediately set about creating opportunities for herself and the musical youth of the valley.

Vanessa also arrived to live on the South Coast in December, and was wondering what she could do and where she was needed. She was introduced to Anna.

By February 2020, they found themselves managing the budding Bega Valley Youth Orchestra and Chamber Strings groups with Badger.

The dynamic duo were also visiting schools, playing music for kids, singing with them, letting them try instruments and generally inspiring them. Then, after only four orchestra rehearsals, COVID-19 and the subsequent lockdowns hit.

Most of their activity was put on hold, however at a recent rehearsal of the Bega Valley Youth Orchestra things were sounding very positive. 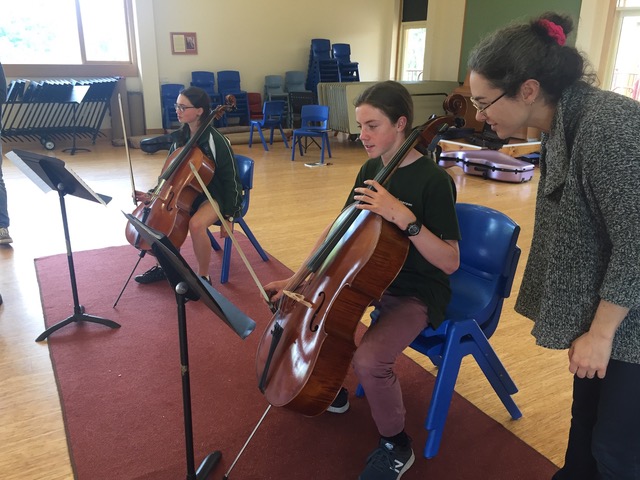 During lockdown, the Orchestra released an impressive video. In past few weeks, they’ve been visited by members of the Australian Chamber Orchestra, attended masterclasses at Four Winds and are currently rehearsing for performances and a digital recording with members of Sydney Youth Orchestra at the Four Winds Spring Youth Music Festival in mid-November.

Anna and Vanessa have also been successful in implementing a ‘Strings Program’ for 2021 at the Sapphire Coast Anglican College.

“Kids will be able to continue learning throughout their school life, and hopefully more will join each year,” says Anna.

Originally from Vermont, US, she spent many years in Salzburg, Austria, studying classical cello.

“It’s a pretty special moment in time that there are these two people who are great musicians and also great teachers here in the Bega Valley,” says Geoffrey.

He also believes their working relationship is unique.

“All three of us work so well in collaboration,” he says. “Often with orchestras it’s a bit of a dictatorship with one person directing. But we all take turns, directing, conducting and encouraging.”

Although it’s all about nurturing strings at the moment, Vanessa says “we’d love to have a symphonic orchestra and would, of course, welcome any young musician.”

Instruments are not that easy to come by so Anna and Vanessa have been busy creating a musical instrument library, obtaining cellos and violins for hire or loan at low rates, and setting about raising money for the necessary hard cases to protect them.

Anna definitely has a twinkle in her eye.

“I love teaching” she says.

Anna, Vanessa and Geoffrey are determined to create musical opportunities for kids, encouraging them to study, to sit for exams, join ensembles and groups and expand their horizons. Their aim is to change the world one string at a time.

If you would like to support the Bega Valley Youth Orchestra or donate towards hard music cases for Bega Valley kids, you can do so here.

If you have an instrument you no longer use and would like to pass it on to a young musician, or if your school is interested in developing a strings program, contact Anna Martin-Scrase: [email protected].

The Four Winds Youth Music Festival program will take place at Four Winds and at several schools around the Bega Valley region from 12-17 November.