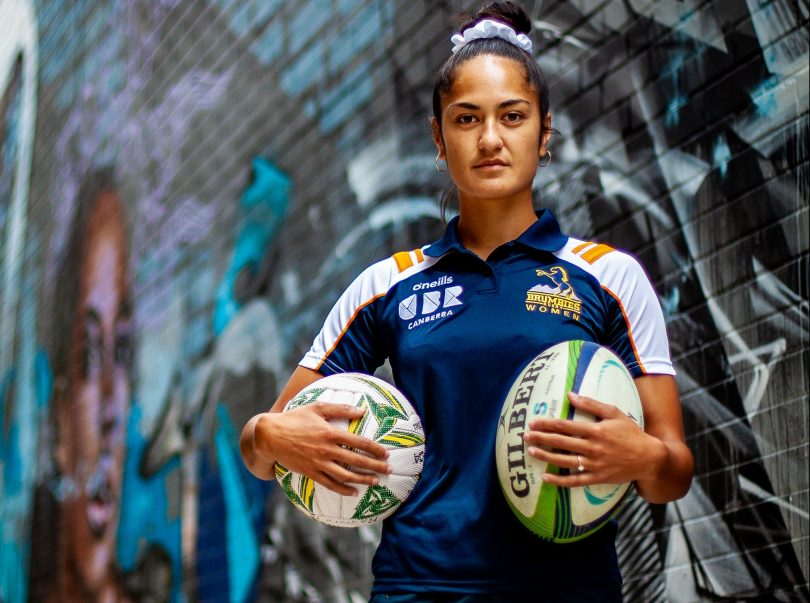 Ngawai Eyles has decided to swap her career as a netballer to pursue her love of rugby union. Photos: George Tsotsos.

She may have only played a couple of games of rugby union and only picked up the sport less than six months ago, but the former Canberra Giants co-captain Ngawai Eyles has decided to swap her career as a netballer to pursue her love of rugby union.

Growing up in the small New Zealand city of Hamilton, Eyles grew up playing multiple sports before going on to represent her country in touch football and signing professional train on and replacement player netball contracts. But despite her success in both sports, her desire was to play rugby one day.

“I always wanted to give rugby a go but because of my commitments to netball I wasn’t able to,” Eyles shared. “Due to full on netball commitments and trying to stay injury free, trying a contact sport in the netball off-season was not ideal, however, I did dabble in a few 7s sessions here and there with my close friends for the fitness aspect.”

When her long-term partner Wharenui Hawera signed on with the Brumbies for another two years in 2018, Eyles decided to join him across the ditch to play with the local netball side Canberra Giants.

It was during the netball off-season that one of her friends invited her to trial with University of Canberra rugby 7s, and she took the opportunity with both hands. Eyles went on to make her 7s debut in August in the national university competition and she has not looked back since. Playing Rugby has always been her passion, Eyles says.

“The goal was to give netball one last go but after having a taste of what 7s was like, the culture and environment, I was happy to give netball a rest and play rugby instead,” Eyles said.

Following an impressive 7s debut, Eyles was offered to attend a training camp with the Brumbies women’s side and after six weeks training with the side, her name was read out by head coach Adam Butt for the Brumbies 30-player squad for the second season of the national Super W competition.

“This opportunity to play rugby has been my goal all along and it has come sooner than I thought possible but now that I have been a given a chance in rugby, I want to try and be the best that I can be and try and make it to the top,” she shared.

“The opportunity to play rugby at this level has definitely come earlier than what I expected and now that I’m here I just want to learn as much as I possibly can and give it everything that I have,” she shared.

“I feel like I have done my dash with netball and I am quite happy with where I have gone with my career. I have always wanted to give rugby a go and I feel like this is my time.”

By the time the Super W season kicks off on the 23 February against the Waratahs at GIO Stadium, Eyles will only have two rugby union games under her belt, but thanks to one-on-one coaching from her Brumbies partner, she feels ready to tackle the season head-on.

“He has been helping a little bit,” she said with a laugh. “We have been doing some one-on-one training sessions where he has focused on things that I thought I don’t need to focus on.”

“We did some one on one training sessions during the AON 7s series last year where we spent about 40 minutes just on agility. I don’t think I need to learn how to be agile because I think I have that sorted. But his feedback and what he says is always valued and I try to take it on board.”