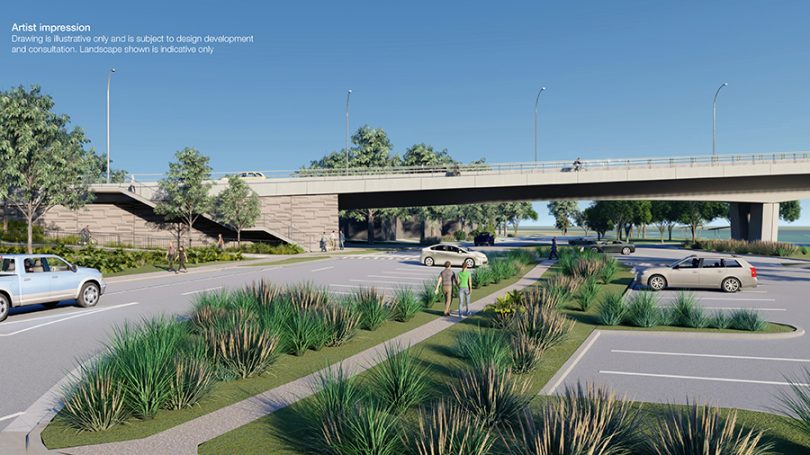 The project team from Roads and Maritime Services will hold two drop-in sessions to answer questions about the design and discuss upcoming work. Photo: RMS.

The detailed design for the Batemans Bay Bridge replacement has been released with a number of changes to the earlier design.

The aim of the $274 million project is to improve freight access, reduce traffic delays in peak periods, and reduce economic and social impacts by removing the current lift span bridge.

Member for Bega, Andrew Constance says, “The detailed design for the Batemans Bay Bridge has been finalised and improvements have been made following community feedback.”

“These improvements include additional lanes to the intersection of the Kings and Princes highways to improve traffic flow in peak periods, ensuring minimal impacts to the community and foreshore areas with a new work method and fewer piers in the water for better river flow, safer navigation and improved visual appeal.

“The foreshore space will also be developed to further improve access to the river.”

Hit play to get a sense of the new detailed plan:

The project team from Roads and Maritime Services will hold two drop-in sessions to answer questions about the design and discuss upcoming work:

Early work on the project is underway including geotechnical investigations on the foreshore and work to build the site office and community information centre on the former bowling club site.

During construction, the Old Punt Road and Clyde Street boat ramps will be out of action.

Continuous river access for boat users will be maintained by a new temporary boat ramp at Korners Park on the northern foreshore of Batemans Bay. To avoid disruptions during the peak holiday period, both the existing northern and southern boat ramps will remain open until late January 2019.

The temporary boat ramp at Korners Park will be removed after its use. The detailed design for the Batemans Bay Bridge replacement has been released with a number of changes to the earlier design. Photo: RMS.

Early works will stop during the peak part of the traditional summer holidays, from Friday, December 21 through to Monday, January 7. Major work will begin in early 2019.

To make comment and take in the more information head to the Batemans Bay Bridge RMS website.

“Today we celebrated two major milestones for the Batemans Bay Bridge project, the opening of a new facility to help...
Read More