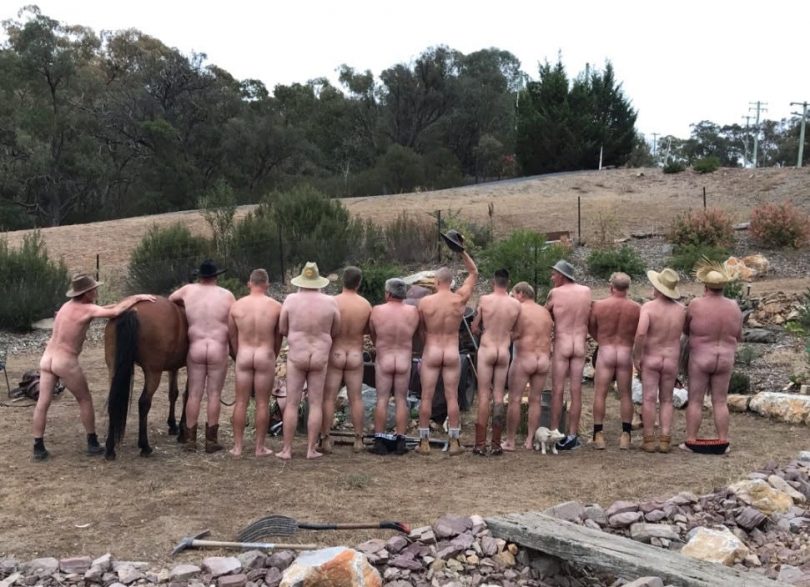 Organisers are having another crack at launching the Men Of Queanbeyan calendar. Photo: Supplied.

After a couple of false starts due to COVID-19, organisers hope nothing gets in the way and the fourth time’s a charm when they host the Respite Care for QBN 1920s Ball on Saturday (19 February).

Raising money for the long-awaited respite care centre in Queanbeyan, this event, along with the launch of the Men of Queanbeyan calendar, was first flagged in January 2020.

While the Respite Care for Queanbeyan group has the funding to build the facility, they have no commitment from government on the $1 million per year required to operate the facility.

Gillian Southwell, an organiser of the fundraiser, says that once built, it will provide a vital service to parents and carers and also save the government money.

“It’s a six-room facility to start with and we’re hoping to offer day stays and things like that so that carers can go shopping or go to the movies and just have a break,” she said.

It’s already taken around three years to get the project off the ground, and still, today, Respite Care for Queanbeyan are awaiting approval on a Development Application. They are still hopeful that the project will be completed before the end of 2022.

The ball has added poignancy following the death of Tascha Loadsman earlier this month.

Tascha was diagnosed with motor neurone disease in December 2019. She became an advocate for a respite care facility in Queanbeyan and was going to be one of the facility’s first patients. Planning delays meant it wasn’t to be.

“It was incredibly disappointing that she passed away so quickly,” said Ms Southwell, who was also a personal friend of Tascha’s.

“She actually did go into respite care, but she had to go into palliative care to get that respite and as she said, ‘that’s where she’ll go to die’.”

For organisers, it’s now about ensuring stories like Tascha’s are never repeated in Queanbeyan.

“This facility is for 18 to 59-year-olds. An 18-year-old shouldn’t be in an aged care facility because their parents or carers need respite. That’s crazy,” said Ms Southwell.

Without any funding to operate the facility, the project’s future is still uncertain. Ms Southwell says that government figures have been passing the buck on the matter so far. She wants several people, including the likely next Member for Monaro, Nichole Overall, to meet with the group.

“Bryan Wilson, who was running for the Monaro seat, actually set up a meeting with us so, some of these people are helping, but the current government are just passing it around,” she said.

“Just sit down and talk with us, for goodness sake.”

The Gatsby-inspired ball, hosted at the Queanbeyan Showground, kicks off at 6 pm, and includes an auction of framed shots from the also-long-postponed Men of Queanbeyan calendar, as well as a performance by BlindSided.

Tickets for Saturday night cost $150 per head. A ticket gets an all-inclusive package of a three-course dinner, drinks, live entertainment and an auction.

For more information on the event or to purchase tickets, head to the Respite Care for QBN 1920s Ball & Men’s Calendar Launch event website.

The demand for more palliative carers in the Queanbeyan-Palerang region has led to the establishment of a volunteer service that is urgently...
Read More