Pete Gorton on the bleeding edge of the move to electric vehicles. Photo: Ian Campbell.

Electric cars are still somewhat of a curiosity, they feel like something from the future that stirs excitement but at the same time hurts to think about.

Plans are advancing, however, to make EV’s – Electric Vehicles – less of a curiosity and more a part of our day to day.

The brave and future focussed in our community are laying the groundwork for broader acceptance and accessibility for EV’s, Millangandi’s Pete Gorton is one such person.

“Change your brake pads every 100,000 km, top up the windscreen fluid, keep air in the tyres and keep driving.”

Mr Gorton recently purchased a 2015 BMW i3 with 23,000 km on the clock, he has since added 7,000 km, part legitimate travel and commuting, part experimentation.

Being in one of these cars is a different experience, no ‘engine’ makes for a silent ride, the gentle hum from the tyres on the bitumen is only noise and reassuring in a way, braking is more about taking your foot off the accelerator, and there is no gear stick to crunch – everything else is pretty much the same.

Take a drive in an electric car

Ever been for a drive in an electric car? Pete Gorton from Millingandi takes us for a spin in his BMW. More to come.Ian

Posted by About Regional on Wednesday, 28 March 2018

“The main challenge this one has is being three years old, so it only has a range of 110 km, newer models are driving further,” he says.

“That provides some interesting ‘flight planning’ as far as where you need to go and what you need to do to recharge.”

Eurobodalla, Bega Valley, and Snowy Monaro Councils are all keen to provide EV charge points as part of a statewide network.

Snowy Monaro is perhaps a step ahead with the NRMA installing a rapid charge point in the Kalkite St carpark at Jindabyne that will be commissioned and ready to use shortly. While Tesla has an existing supercharger in the Cooma Coles car park on Commissioner Street.

The NRMA is also working with council on charge points at Cooma, Bombala, Adaminaby and Nimmitablel as part of their electric vehicle fast charger network.

The charge points will be free to use for NRMA members or at a minimal cost for non-members.

Eurobodalla Shire Council’s Sustainability Coordinator Mark Shorter says plans are also advancing for an NRMA charging station at Batemans Bay, which will hopefully be in place before Christmas. While Tesla has flagged an 8 bay charger for Narooma in the near future.

“It is entirely feasible to connect Melbourne, Canberra, and Sydney with as few as 12 fast-charging stations,” he says.

“These could be spaced an average of 97 km apart and make it possible for all major electric vehicle types in Australia to travel this route.”

An initial concept proposes three charging stations in Eurobodalla at Batemans Bay, Bodalla and Tilba at a cost of between $500,000 and $1 million.

“Having an electric highway could provide a big boost to regional tourism,” Mr Shorter says.

“It forces drivers to stop and refuel for 20-30 minutes in our regional towns. It also removes ‘range anxiety’.” 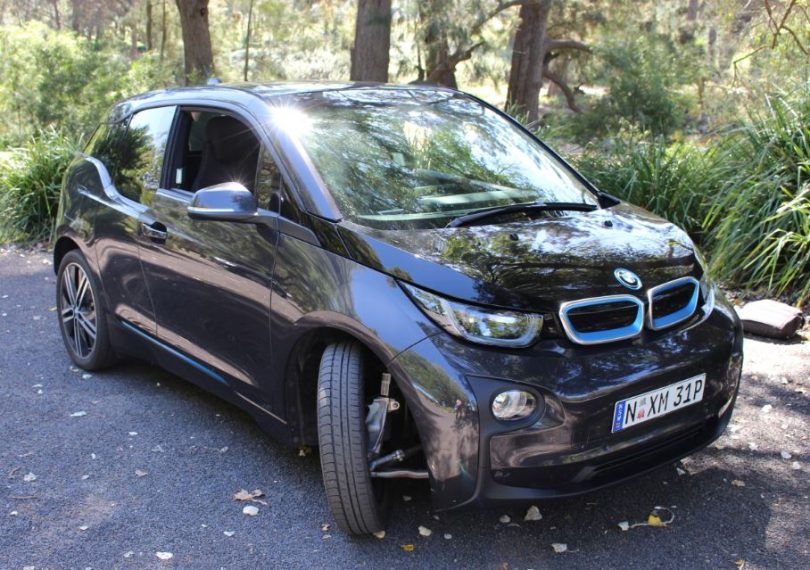 Bega Valley Shire Economic Development Manager, Daniel Murphy says, “As part of the 2018-19 Operation Plan we’re looking into a partnership with NRMA in the development of an EV charge point in Bega.”

He’s hoping more will be known in the coming months.

Right now people like Peter Gorton are making the most of what’s available and finding workarounds to charge their EV during a journey.

“You can recharge an electric car wherever you have power,” he says. 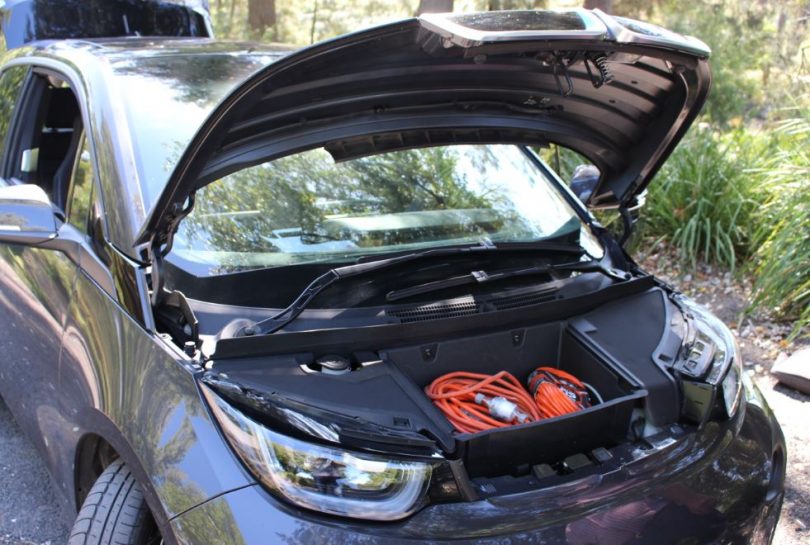 Mr Gorton is ready to plug into any power supply he can find. Photo: Ian Campbell.

Caravan parks and show grounds with their higher voltage infrastructure form part of Mr Gorton’s road tripping at the moment or even a domestic socket during an overnight stay. All the adaptors he needs to make any electrical outlets work sit under the bonnet of his BMW where the engine would be in any ‘normal’ car.

“To fully charge the BMW costs about $6,” he says.

“From Bega I top up at Bemboka and then Cooma Showground, where a full recharge to get me to Canberra takes about three hours, then I recharge in Canberra.

“It’s okay for me, I have a bit of time on my hands, I am happy to buy a coffee, read the paper and do some shopping.

“But if people have a couple of kids and they just want to go from A to B, you need to to be able to use a fast charger, which will fully recharge your vehicle in 15 to 30 minutes.” 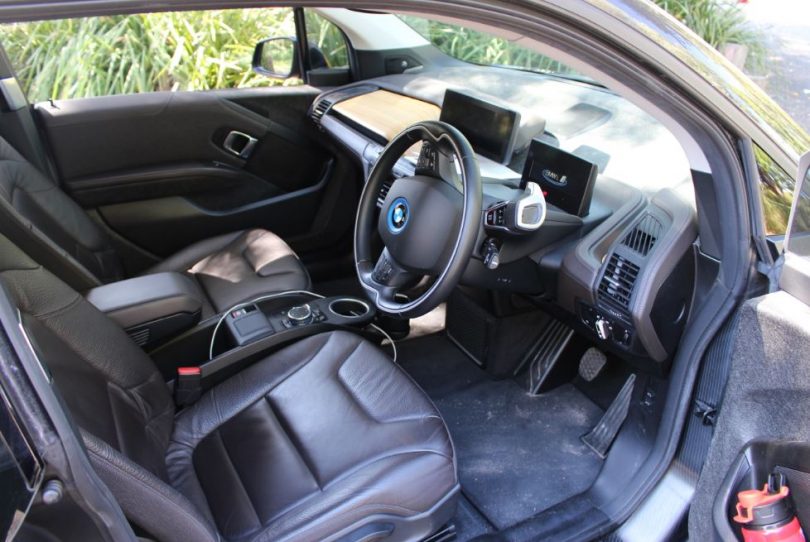 A very comfortable drive, inside the BMW i3. Photo: Ian Campbell.

Mr Gorton says the technology is moving quickly, with Porsche and Jaguar working on recharging systems that take just 10 minutes.

“This is the future, once you have driven an EV you would never go back to burning dead dinosaur juice,” Mr Gorton laughs.

At home, Mr Gorton’s electricity for his car comes from a 7 kW solar system on his roof.

“Coal is on the way out, our society needs to decarbonise, and that is happening.”

A clever feature in all EVs is their ability to generate their own power as they go.

“So for example coming down Brown Mountain I end up with 10% more charge at the bottom than I had at the top,” he says.

“Rather than using the brakes and turning energy into heat, regeneration puts energy back into the engine.”

The process of building these cars and then managing their old age is also built around clean green values.

Current EV batteries are forecast to last 15 years, Mr Gorton says manufacturers have committed to recycling those batteries and extending their lives by a further 15 years.

“Recycling in this industry is interesting, the vehicle is 95% recyclable at the end of its life, and instead of plastics, they use a material made from flax.

“The idea is that it has a low footprint to manufacture, there are many less parts, and this BWM is made in a factory in Germany that is fully powered by renewable energy.” 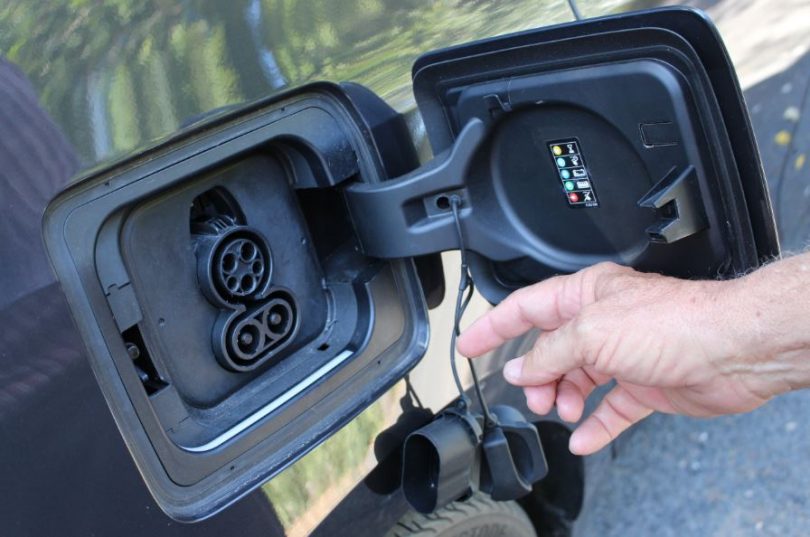 Rapid charge points are being planned across the NSW and the ACT to plug into. Photo: Ian Campbell.

For more EVs to hit the road that network of fast charging points seems key, an equation Mr Gorton relates to the transition from the horse to the car last century.

“If you go back 100 years how many petrol stations were there? People had to plan their journey,” he says.

“We can leverage the fact that we have got good electrical infrastructure around the country.

“Already you can drive completely around Highway One using an electric vehicle and it doesn’t have to be a $100,000 Tesla, it can be something for half that price.”