The man asked to review some of the circumstances surrounding the Bega Valley’s March 18 bushfires has reaffirmed the communities’ confidence in the men and women that went running into those flames at Reedy Swamp, Vimy Ridge and Tathra on that hellish afternoon.

But Mick Keelty has also pointed to a number of operational and cultural areas in need of improvement across the Rural Fire Service (RFS) and Fire and Rescue NSW (FRNSW).

The ex-Australian Federal Police Commissioner was given the job by NSW Emergency Services Minister Troy Grant just three days after 65 homes were destroyed.

The appointment came amidst the heat of media coverage suggesting the RFS had declined assistance from FRNSW in the early stages of the blaze as part of an ongoing turf war.

“Mr Keelty has the credentials and the experience to properly review the operational response to the Bega Valley fire, having led an independent inquiry into the 2011 Perth Hills bushfire and the 2012 Margaret River bushfire,” Mr Grant said at the time.

“His expertise will ensure an independent assessment of the events surrounding this natural disaster.”

The scope of Mr Keelty’s work was limited to two points:

The opening paragraph of Mr Keelty’s review should put local volunteer and paid firefighters at ease: “We are used to pouring accolades upon our firefighters who alongside with other emergency services personnel and many members of the community, place themselves at risk to save lives and protect property in times of fire, natural disasters and emergency situations. Nothing in this Review should change that very positive and realistic perception.” Mr Keelty says. 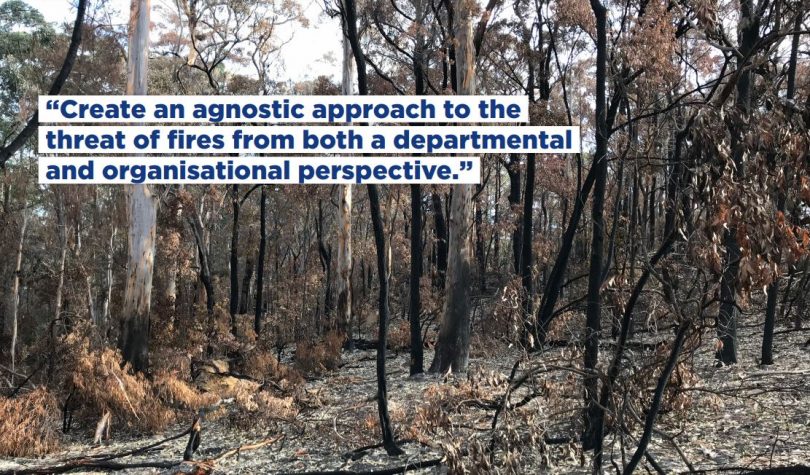 The review found that the RFS decision to refuse FRNSW offers of assistance had no impact on the outcome of the incident due to the severity of conditions and speed of the fire. Notwithstanding this, other submissions to the inquiry suggested that such offers are routinely declined around NSW, sometimes in less clear-cut circumstances.

During the course of the last three months, Mr Keelty has reviewed 183 submissions, interviewed 25 people or agencies, and took part in five focus group meetings and site visits.

“Importantly, no one lost their lives and 810 houses were saved through the combined efforts of firefighters, police and residents,” Mr Keelty’s report says.

“There are some natural disasters and bushfires that are beyond human intervention to control. It is therefore incumbent upon all of us to ensure we use an integrated and contemporary approach to those challenges to make our communities safer and more resilient.”

Fundamentally, Mr Keelty concluded that there were five fires and many more homes might have been destroyed and even lives lost had the efforts of firefighters and residents not been so successful on the day.

The 28-page report released on Friday comes with 12 recommendations all of which are being supported by the Berejiklian Government.

Mr Keelty has been strong with his language around the real and proven turf wars identified between the state’s two fire services.

“From the outset of the Review it became clear that staff within FRNSW had been building a dossier of incidents where it is claimed the RFS had not responded appropriately to some 110 fires across the State,” he says.

“To bring animosity forward in the hours following people losing their homes and life possessions is deplorable.

“The Review could not ignore the elephant in the room that members of both fire organisations are often critical of each other, with animosity at times palpable,” Mr Keelty says.

“It seems that the common enemy of fire is sometimes overlooked through the distraction of finding fault with each other.” 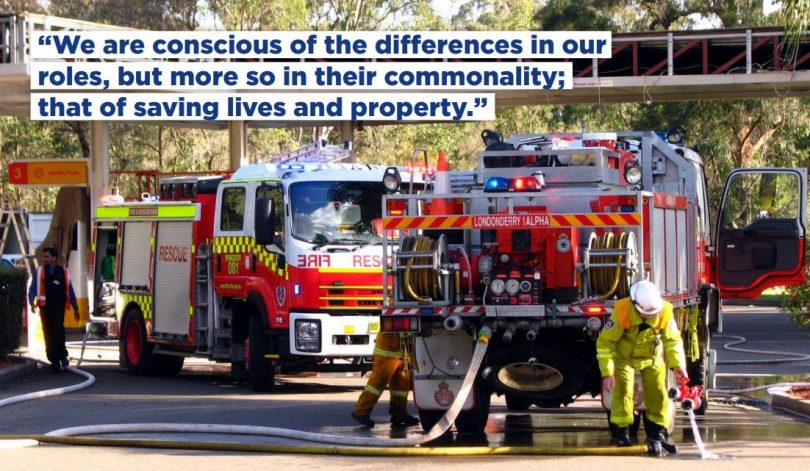 Member for Bega and NSW Transport Minister Andrew Constance says the report is warts and all.

“I know that there are good strong relationships at a local level,” he says.

“Although Mick Keelty has found there are some cultural problems within middle tiers that do need to improve, in terms of the Commissioners and the local volunteers I only have complete admiration in both the RFS and FRNSW.”

The Keelty Review found that the call and dispatch arrangements between a 000 caller, FRNSW and the RFS are flawed and in need of urgent reform; it appears to be the weak point where the tension between the two services comes to the surface.

“It is clear that the power imbalance of one agency managing call-taking for both agencies is the nub of the problem. Equally, FRNSW Communications Centre (ComCen) forward deploying assets without the knowledge of the RFS merely exacerbates the situation,” Mr Keelty says.

“To their credit, both Fire Commissioners have taken steps during the conduct of this Review to place an RFS officer into the FRNSW ComCen but a significant amount of mistrust about the dispatch process remains in the middle management ranks.

“Fire is agnostic. Along with natural disasters, it gives no credence to the agency used to combat it, the jurisdiction in which it burns or to the people who respond to it.”

In looking for solutions, Mr Keelty examined other call and dispatch centres and formed the view that the Ambulance Service of NSW is an excellent model as is the ‘civilianised’ operation run by the NSW Police Force.

“A strategic and long-term solution needs to be found that sees each of the [fire] agencies working side by side in a civilianised call and dispatch centre,” he recommends.

Aside from the Bega Valley example, Mr Keelty also reviewed call and dispatch experiences from fires at Port Macquarie, Taree, and Nimbin.

“These other instances reinforce the Review’s findings in relation to the call and dispatch arrangements.”

Bega Valley members of the RFS and FRNSW get together in the days after March 18 at the Tathra RFS shed to show there support for each other. Photo: Tathra RFS Facebook.

The former AFP Chief also regrets that change called for over 20 years ago wasn’t fully implemented.

“The vision of the 1994 Bushfire Inquiry conducted by the then NSW Government that the two fire services cooperate rather than compete has unfortunately not been fully realised, which reflects poorly on all parties given the time since these issues first came to light.”

The need for better information and communication both internally and with the community is the other clear theme running through the 28 pages.

“Unlike the NSW Police Force, Ambulance Service of NSW and FRNSW – the RFS relies solely on radio and telephone communications,” Mr Keelty highlights.

As a matter of priority, Mr Keelty recommends that, as much as possible, the rollout of Automatic Vehicle Location (AVL) technology takes place across the RFS fleet before the next fire season.

“This Review contends that improved awareness of the location of the RFS and other operational resources clearly needs to be improved,” he says.

“No better example of flying blind was the RFS and FRNSW providing two completely different pictures to this Review on what resources were available to fight the Bega Valley fires on March 18 2018.

“Thankfully, the error was in favour of the community, with more FRNSW resources being available than that shown by the RFS Incident Control Online (ICON) system.

“The adoption of an Automatic Vehicle Location device, interoperable with those already in use by FRNSW and the SES will go some way towards addressing some but not all of these problems.”

Mr Keelty makes the point that the benefits of having better situational awareness are lost if the information isn’t shared and communicated back to decision-makers and the community.

He believes it’s an issue of immediate priority for the NSW Government and RFS.

According to the NSW Office of Emergency Management, “The RFS will commence a trial of automatic vehicle location on the Government Radio Network within the next three months in three locations including Queanbeyan, the Central Coast, and the North West of NSW. The timing of further roll outs will be subject to the assessment of the trials.” 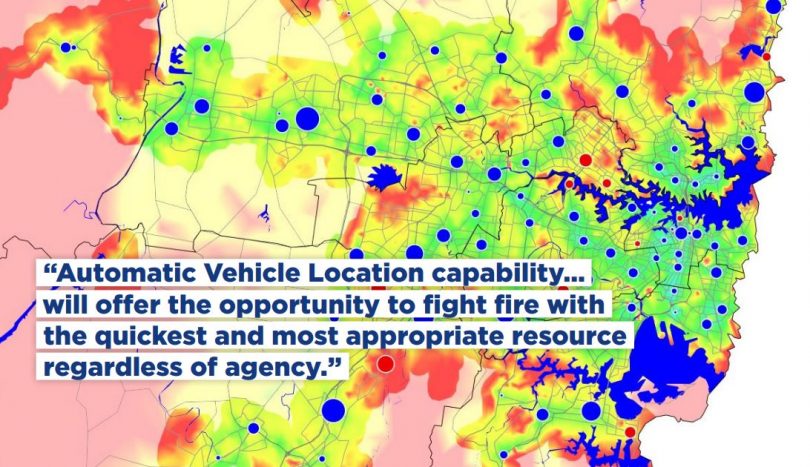 In terms of sharing that bushfire information with the public, a break in the “single source of truth” was identified as having an impact on people during the 18 March bushfires.

“The reliability of the information provided to the community during a fire is largely reliant on the accuracy of operational systems,” Mr Keelty says.

“When these systems do not have up to date information, there is potential for the community to not accept or trust the reliability of the available information.”

Because of this, trusted news sources, like the ‘Fires Near Me’ app, which are directly linked to RFS reporting systems, weren’t being updated with timely advice.

“Many submissions to the Review complained that during the Bega Valley fires the Fires Near Me app provided an ‘Advice Only’ reading when in fact people should have been evacuating,” Mr Keelty says.

“Which in extreme cases could potentially put lives at risk.”

This appears to have had flow-on effects for the emergency coverage normally provided by local ABC radio.

“ABC radio continued normal broadcasts on the day of the fires rather than broadcasting updates to the community which has been the practice in the past,” he says.

“An internal review by the ABC is addressing this problem, however, the ABC would have suffered from the same lack of updated information.”

With Fires Near Me and the ABC both poorly informed, the number of 000 calls increased in the desperation for information, adding to the overwhelming nature of managing this intense situation.

“There were delays in feeding information back to the FRNSW ComCen which was taking a large number of repeat 000 calls from persons either reporting the fire in a different location or who were seeking advice as to whether or not they should stay or leave their homes,” he says.

“This lack of feedback was partly due to the fast-moving nature of the fires and led to delays in updating the Fires Near Me app.”

Mr Keelty is recommending that the effectiveness of emergency public information arrangements is reviewed and that consideration is given to embedding an ABC Manager, not a journalist, into the RFS headquarters during emergencies to broadcast warnings to the community and pooled to commercial media outlets. 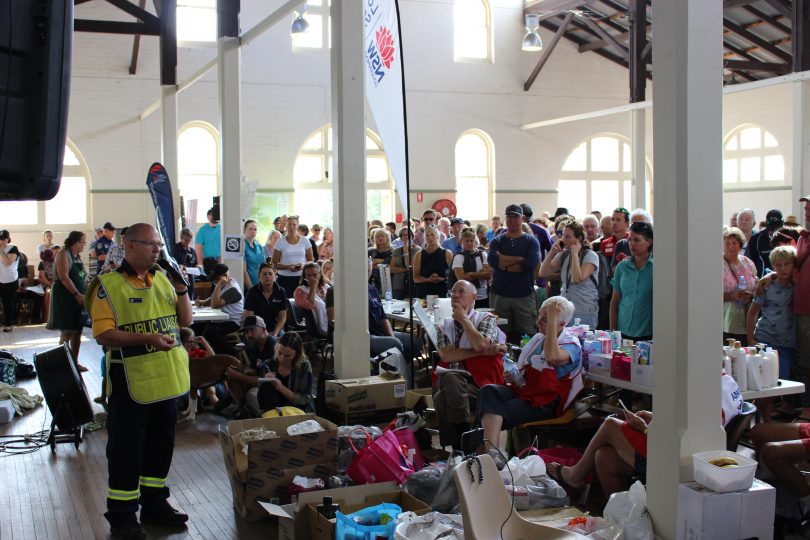 All the issues identified aren’t specific to any one region, these matters have been shown to have a statewide context.

Through the work of Mr Keelty and all those who contributed to his Report comes something that goes beyond the communities of the Bega Valley.

Dozens of impacted families are yet to claim a space that has any sense of longevity and those that are making a cuppa in their own home each morning are greeted by the most confronting view from their kitchen window.

This Report is another acknowledgement of what these people have survived, but unique to Mr Keelty’s contribution is the hope of lessons learned and recognition of a strong community.

“While this Review is critical in some parts, it should not be seen as anything other than a strong supporter of the 85,000 volunteers in organisations such as the NSW Rural Fire Service, Fire Rescue NSW, and the NSW State Emergency Service,” Mr Keelty says.

And with a pointer to climate change, he urges us to heed his advice: “What was known as a typical bushfire season lasting a few months over summer has now extended to almost eight months of the year, not including hazard reduction activities and strategies.”

There is a lot more to take in, you can read the full report and recommendations HERE as well as the NSW Government’s response HERE.

The inquiry by the NSW Coroner into the 18 March bushfires is ongoing.

For support and advice around the Reedy Swamp, Vimy Ridge, and Tathra Bushfires check-in with Bega Valley Shire Council.