The ACT and south-east region are experiencing the first real taste of summer this year, but the soaring temperatures this week also bring an elevated fire danger.

Yesterday’s temperatures in the low 30s will rise during the week, and the Bureau of Meteorology has issued a high fire danger rating across the region until Thursday (14 January).

On the NSW South Coast, Bega hit a maximum of 33°C on Monday (11 January), as did Wellington on the Central Tablelands. On the Southern Tablelands, Yass peaked at 35°C.

The ACT can also expect a blast of heat. The temperature will rise to at least 36°C on Wednesday, and the heatwave is expected to remain with us until Friday.

Bureau of Meteorology meteorologist Melody Sturm said the heat is caused by a very slow-moving high-pressure system that is pulling warm air from central and northern NSW.

“Temperatures will be at least 8 to 9 degrees above average, and there isn’t expected to be any real relief from showers or thunderstorms,” she said.

“Overnight temperatures will also be around 18 to 19 degrees, and people in the Riverina and ACT should also expect the very high fire danger rating to last until Thursday or Friday,” Ms Sturm said.

On Tuesday and Wednesday, a weak trough may affect southern districts but is unlikely to bring much rainfall or cooler conditions. A stronger trough is then expected to gradually move across from the west on Thursday and stall as it reaches the north-east on Friday.

Temperatures are then expected to drop below 30 on the weekend with partly cloudy conditions.

Many people are also taking advantage of the opportunity to head to the coast, where perfect conditions have been reported over the weekend. Warm and sunny days will also continue this week.

On the beaches, the traditional summer northerly winds will be dominant, so early mornings will be the best time to make the most of the beaches as only a slight swell is forecast. 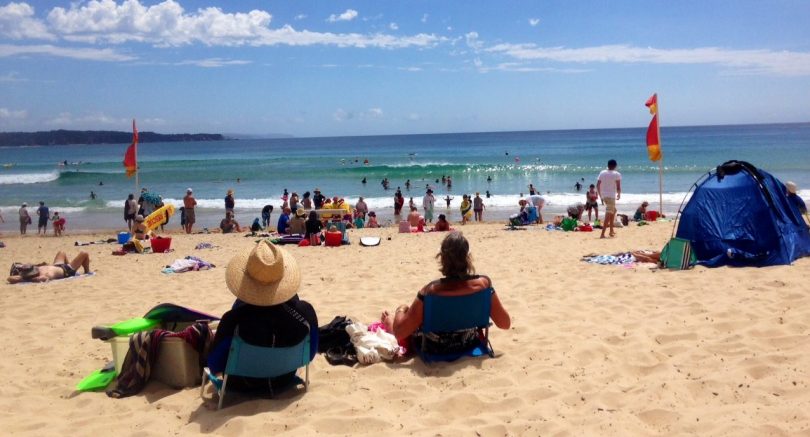 All of the region’s public swimming pools are reporting record numbers after bushfires burnt through one of the hottest summers on record last year.

A spokesperson for the Queanbeyan Aquatic Centre said hundreds of people have been cooling off at the centre’s outdoor pool and splash park.

However, that is partly due to their indoor pool being closed for resurfacing until the end of this week.

“There have been at least 300 people here each day over the weekend, and we’re looking forward to a very busy week ahead,” the spokesperson said.

“We still urge people to book ahead, though, to ensure they can get into the pool with the current restrictions.”

At the Dickson Aquatic Centre, some people have been turned away as the centre has reached its capacity of 500 people due to COVID-19 restrictions. It would normally allow 1000 people but is currently limited to 500 people in timed sessions.

Similarly, at Manuka Pool, hundreds of people have enjoyed the return of summer, as the historic pool begins its 90th year.

People attending all public pools are being urged to book ahead, while also remaining aware of social distancing requirements.

ACT Health urged Canberrans to watch for early signs of heat stress, which can occur on normal summer days, but increases when the temperature exceeds 28 degrees.

ACT Health also issued COVID-19 safety advice for those flocking to pools, including using hand sanitiser, not sharing pool equipment with people from other households, minimising touching surfaces, staying home if unwell and getting a COVID-19 test if you have symptoms.