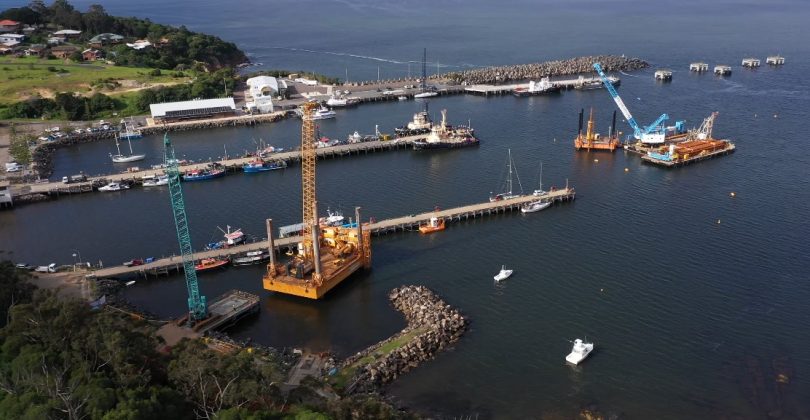 Ten years after the wave attenuator was proposed for the Port of Eden the arrival of huge barges and cranes has signalled stage one of its construction.

Transport for NSW said Eden’s port is occasionally exposed to wind and wave conditions that can affect safety at the port and increase the risk of damage to vessels.

To make the area safer, a 366-m fixed panel wave attenuator is being built towards the inlet at Snug Cove between the two mooring jetties to muffle the impact of wave activity and protect boats and other maritime infrastructure.

A 400-t jack up barge has now arrived from Port Headland, a 270-t crane has been trucked to the site in pieces and assembled and a 600-t floating barge with a 210-t crane on deck has also arrived.

These will be used to build the wave attenuator, along with dumb barges, tugs, cranes and piling hammers.

Bega Valley Shire Mayor Russell Fitzpatrick said the whole community had been talking about the safe harbour project. The construction of the attenuator would be great for local jobs but would also allow for further development like a marina.

“It’s good to see it all starting to take place,” he said of the project that was proposed in 2012.

“The attenuator is well and truly underway.”

Mayor Fitzpatrick said the attenuator and the Eden Wharf extension showed an enormous investment by the state government into continuing the development of Eden.

Mr Hutchings said the first of 127 piles was being driven into the seabed, with this work set to continue until the middle of the year.

READ ALSO: Boyd’s Tower precinct near Eden to be repaired and made more accessible

“The majority of these materials are being built off-site and delivered by road to Eden, to be installed at sea by the project team.

“We’re also improving existing infrastructure within the port by replacing the fender piles on the mooring jetty to provide safer mooring locations for recreational and fishing vessels for many years to come.”

He also said marine mammal observers were on-site during the piling to stop work if any marine life came near the operations.

The wave attenuator is expected to be finished construction by the end of 2022.

The new Eden Welcome Centre has opened for business ahead of the news that cruise ships will be returning to...
Read More

The project to bring kilometres of new mountain bike trails to the forests outside Eden has reached a milestone, bringing...
Read More

Proposed modifications to the Eden Cruise Wharf could see vessels up to 370 m long and carrying almost 7000 passengers...
Read More

UPDATED: Boat with 50 tonnes of fish on board sinks in Eden

UPDATED 1:30 pm - Some diesel has spilled from a 20-metre commercial fishing trawler which sunk in the Port of Eden...
Read More