Allan Spencer, founder of the Australian National Busking Championships, with the Busk CD featuring talent from the festival.

For the last five years, the Australian National Busking Championships have been based on the Monaro. And while talent from across the nation has been drawn to the streets of Cooma to compete and take part, that claim of being a ‘national championship’ didn’t carry the weight the name implies.

With the backing of Rotary Clubs along the East Coast, the Busking Championships will cover three states and at least six regional centres.

Cooma based Championship Founder, Allan Spencer is delighted as he rattles off communities that have picked up the idea and run with it, including Stanthorpe and Noosa Heads in Queensland, Ballarat and Wangaratta in Victoria, Narooma and Berry in New South Wales.

Most of the towns taking part are combining the Championships with an existing festival that needs a bit of ‘sparkling up’ according to Allan.

“I think that works well, because busking won’t work unless you’ve got a lot of people,” he says.

“In Stanthorpe for instance, they’ve got an apple and grape festival that’s in it’s fiftieth year and it’s tremendously well attended, they have sixty thousand visitors, so the busking was quite an easy fit.”

Surrounded by the instruments and sheet music of his long-running business, Allan becomes emotional talking about the success of the Busking Championships. 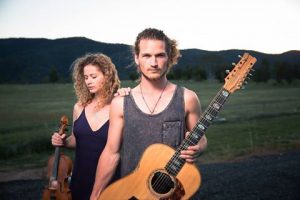 “There’s Guy Lilleyman, who’s a Canberra based musician, he won the title – Open Champion in 2013 and 2014. And on the strength of 2013, he was picked up by an agent and he had a tour of South Africa.

“He’s just come back from a 10-week tour of Afghanistan, entertaining Australian and NATO troops,” he says.

“It’s always been a bit of a crusade of mine to try and promote talent,” Allan says.

As the owner of the Cooma School of Music, the organisers of the annual Snowy Ride approached Allan in 2011 looking for live entertainment during their annual fundraiser for the Steven Walter Children’s Cancer Foundation.

Over 2200 motorcycle riders took part in this year’s Snowy Ride, adding a whopping $250,000 to the $6 million that has been collected since 2001. The Australian National Busking Championships that were created to serve the Ride are now very much a part of the whole weekend each November, covering 28 locations around the Cooma CBD with over 160 acts.

“I’ve been talking to businesses after this year’s event,” Allan says.

“A lot of them are saying it’s their best trading day of the year.

“The proof is that every year all our wonderful local businesses put up their hand to sponsor the event.” 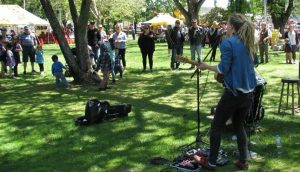 Centennial Park Cooma is a focal point for the Championships

Ten thousand dollars was shared among the winners this year adding a serious edge to a craft some see as worth nothing more than loose change.

“There are buskers that do it as their career,” Alan says.

“It’s not an easy career, but they really enjoy the freedom.”

Allan says the prize money is key in attracting artists to play but he believes that local talent needs to be looked after as that stiff competition lands.

“I want to also mention the City of Queanbeyan Pipe and Drum Band, which is a 20 piece bagpipe band,” Allan says.

“They marched down Vale Street, straight to our war memorial, and they gave their first set there.

“It was a ‘hairs standing on the back of your neck’ kind of situation, it was really a moment to treasure.

“Then they played outside various pubs, they were busking, and they raised $500 for their group, they were over the moon,” Allan says. The Queanbeyan Pipe and Drum Band

Allan believes we should celebrate our buskers and the contribution they make to life and culture in regional towns especially, he’s hoping more country towns come on board with the Championships.

“We think this is a great opportunity for regional centers to add something to their town.”

The program for the expanded format in 2017 is still being finalised, with Allan keen to speak with his partners Cooma Rotary.

At this stage, however, his thinking is that the South East Regional Final will be held on the first Saturday in November, followed by the National Final the next day – both held in Cooma not Canberra or another capital city where national finals are normally held.

Cooma – the town that built the Snowy Scheme is influencing Australia yet again.

*Copies of the Busk CD are available from the Cooma School of Music and by mail order.