While many of us are suffering COVID-19 fatigue, Far South Coast real estate agents are not.

Bermagui agent Julie Rutherford expected a downturn in the property market following the Black Summer bushfires and the onset of COVID-19 restrictions, however the result has been quite the opposite. She predicts demand for homes on the NSW Far South Coast will continue into the summer months.

“It has been a year like no other, and significant events such as the bushfires and COVID-19 pandemic have an impact on our local economy and real estate market,” she says.

Following the bushfires, Julie says many impacted families decided to buy an existing home rather than rebuild.

“The demand, in particular, was for homes in the $600,000 and under price range on the coast and in the villages, particularly Cobargo,” she says.

“Once COVID-19 restrictions and lockdowns took effect, the demand for any property in the area – rural, lifestyle, residential – started to flow on.

“Those people who had been thinking of making a change out of the city suddenly realised they could and they should. Some of them lost their jobs and retired early; others plan to work from home; and some just decided to make the move anyway.”

Julie says the trend was not confined to retirees, and included young couples and singles, families and empty nesters. She adds that moving into the warmer months, demand is still high and supply is low.

“Moving forward, we believe that significant other factors will influence real estate, including tightening of mortgage lending criteria, higher unemployment and the anticipated drop in metropolitan property prices which affects potential buyers’ budgets.”

Ben Bate from Ben Bate Real Estate in Narooma agrees that after a “very active” winter, buyer demand is still very strong on the South Coast.

“Buyer demand is very strong and we expect to see an even greater degree of enquiry,” he says. “[However] stock levels are at a very low level which has, in turn, put upward pressure on prices.” Ben says investment properties under $500,000 are in highest demand, followed by anything close to the beach or with an ocean view, and rural properties.

“Investors are buying in a big way, followed by people relocating here from outside the area,” he says.

Ben says buyers are hailing from a mix of areas, but he has been seeing more from Sydney than Canberra.

While the start of the year was quiet due to the bushfires and COVID-19, Ben says things took off in winter.

“One property, at 37 Long Point Street, Potato Point, had been on the market when the fires occurred and then came off the market,” he says. 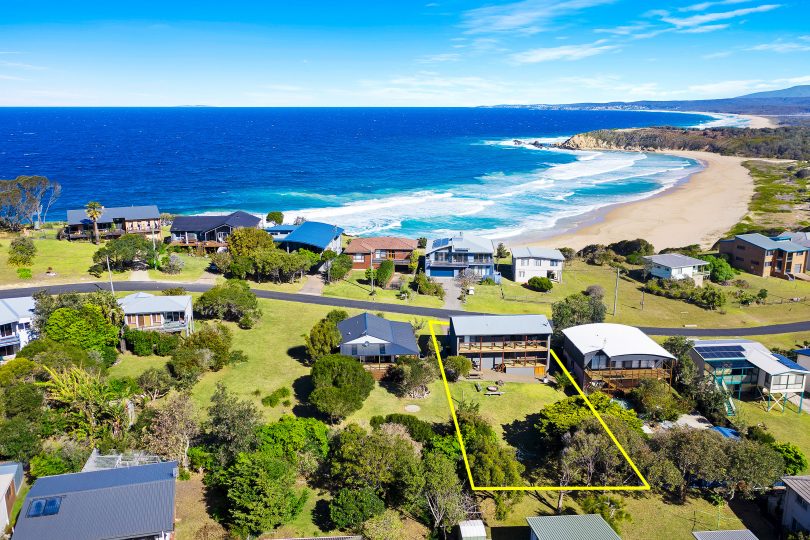 “It went back on during COVID-19 with minimal interest and then, in July, interest took off. We ended up with three offers on the property at the same time and a sale price of $599,900.”

He says 29 Lakeview Drive at Narooma was on the market for 24 hours with multiple inspections, and sold for $815,000.

Peggy McAlister from LJ Hooker at Malua Bay expects the strong market conditions to continue, with good prices being achieved as people from Sydney and Canberra seek holiday and “part-time” homes on the South Coast.

“More people are working from home and looking for properties with good internet access and a nice work space,” she says.

“We used to see clients from Canberra and regional areas such as Wagga Wagga looking for an old beach shack as a weekender, but what we’re seeing as a trend now is people wanting more upmarket properties in the $600,000 to $900,000 price bracket.

“They want a second home where they can live and work part-time on the coast.” Luxury coastal “part-time” homes, such as this one at Mary Place, Long Beach, are in demand. Photo: LJ Hooker Malua Bay.

Peggy says that due to high demand, she sold a luxury home at Mary Place, Long Beach, before it hit the market.

“It sold after the first inspection and set a record for the street,” she says. “The Canberra family already had a beach house in the area, but they wanted to upgrade to something more substantial where they could spend more time away from the city.

The insidious COVID-19 pandemic gripping the world is proving to be a catalyst for an escape to the country for...
Read More

Rooms with a view you’ll love forever at Batehaven

On a street that literally has 'view' in the name, it's no surprise there was going to be plenty of...
Read More