Brothers Lewis and Harry Bates in the workshop with one of their Toyota Yaris AP4 rally cars. Photo: Michelle Kroll.

With the news that this year’s Horizon Apartments Narooma Forest Rally has been postponed until 19 September, brothers Harry and Lewis Bates are itching to get back behind the wheels of their Toyota Yaris AP4s after dominating this year’s only rally event so far, the AMH Automotive Rally of the Bay.

They are also pondering what their future might hold with their coach, ‘sports psychologist’, head of development, head of technical innovation, most nervous fan and dad: four-time Australian Rally Champion Neal Bates.

Harry and Lewis are the second generation of talented drivers from the Bates racing dynasty. Both young men are polite, intelligent, extremely passionate and very serious about their rallying careers.

In 2019, Harry won the Australian Rally Championship, with Lewis coming a close second. This year, they are already first and second in the championship respectively, albeit after only one race. From left: Lewis Bates, father Neal Bates and Harry Bates in front of a whiteboard with their childhood dreams written on it. Photo: Michelle Kroll.

“Rally drivers tend to reach their peak as athletes around 30 years old,” says 23-year-old Lewis. “If we want to take the next step, we need to start planning for it now.”

Currently backed by Toyota Gazoo Racing, both drivers are brand ambassadors for Toyota. They drive Toyota Yaris AP4s, and the technological development of the cars in rallying contributes to safety features available in new models released by Toyota to the general market. 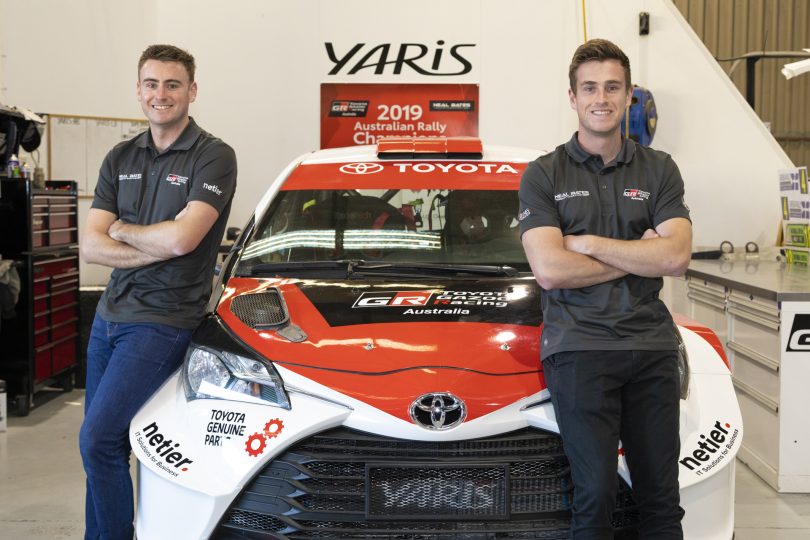 “If we didn’t race these cars, the technology would develop at a slower rate,” says Neal. “The modifications we make to turn them into race-winning cars help the technological development of the smaller car market.”

Harry and Lewis are both keen to compete in the World Rally Championship, but it will be an expensive bid to challenge on the world stage.

“Once you put on your race gear, with gloves, helmet, HANS device [head and neck support] and suit, you’re looking at $10,000 just for the gear,” says Harry.

“We’ve got some great sponsors. Obviously we’ve got Neal Bates Motorsport and others such as Damesa Industries, from Queanbeyan, and Netier, which have been really solid in supporting us since day one.”

Neal says his sons’ ambitions are a long-term plan.

“The planning has to start now,” he says. “We sat down as a family and worked it out; the full cost of a World Rally Championship attempt is about $3 million.”

The Bates brothers will be competing in the Horizon Apartments Narooma Forest Rally on 19 September, but there has been no word yet on whether the event will allow spectators.

However, one thing is certain, the rivalry between the two Canberra brothers to top the Australian Rally Championship podium will not have diminished.

The Horizon Apartments Narooma Forest Rally that was scheduled for 19 September has been cancelled, placing the 2020 Australian Rally...
Read More