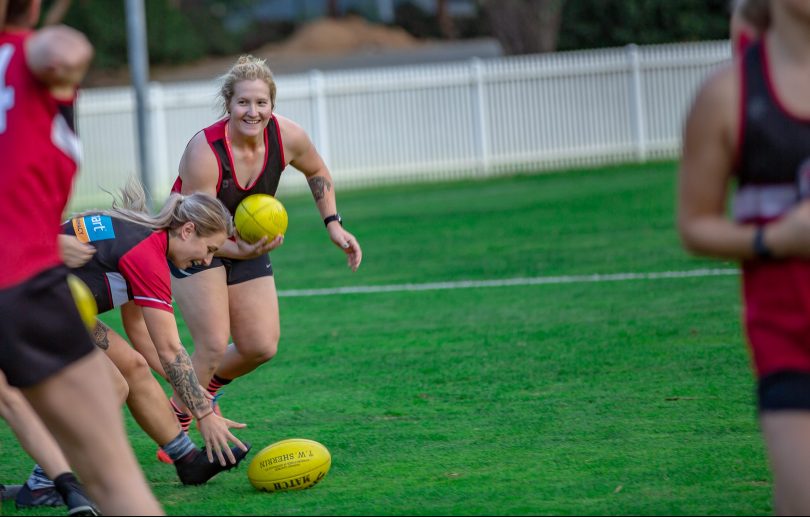 Britt Tully has taken up the role of player and coach at the North Canberra based Ainslie Tricolours this season. Photos: George Tsotsos.

Sixteen-year-old Britt Tully knew her Olympic dreams were dashed when the International Olympic Committee decided to remove softball from the games after the 2008 Olympic Games. What she didn’t realise was that decision would be the catalyst for her fulfilling another childhood dream in a different sport.

“It all went downhill when the sport did not get included at the Olympics,” Tully said. “I was a bit annoyed at that, not that I would have made it to the Olympics.”

It was at that moment her friend tapped her on the shoulder and said she should give Aussie Rules a crack. Ever since she watched her favourite Collingwood players burst through the banner as they ran out onto the MCG, she wanted to follow in their footsteps. The only problem was that she was a girl.

“I grew up kicking the footy down the oval with dad but I never realised it was a sport that I could play, and it probably wasn’t back in the day,” Tully recalls. “Auskick wasn’t really for girls at that point and even when I was playing soccer, I was playing in the boy’s team till under 11s because there weren’t many girls teams around.

“Dad grew up playing and he was a big Collingwood supporter so we grew up barracking for Collingwood together and kicking the footy down the oval at half time.”

She credits those halftime kicks as the reason the sport came so naturally to her. Barely five years later, she developed into the best female Aussie Rules player in the ACT, claiming AFL Canberra Women’s Best and Fairest award in 2016 and 2017 and being named in AFL Canberra Women’s team of the year for five successive years (2013 – 2017). Tully is the best female Aussie Rules player in the ACT.

The unassuming midfielder only had her eyes on playing rep footy for the ACT when the news broke that a potential women’s AFL competition was being set up. After a few trials at the Giants, Tully was kept in the dark till she saw her name appear at pick 80 in the inaugural 2016 AFLW draft.

“I was sitting at the computer watching the draft and then I saw my name. It was pretty crazy and surreal,” she said with a laugh.

Tully made her AFLW debut in the Giant’s thirty-six point loss to Adelaide at Thebarton Oval in the opening round of the 2017 season. But the scoreline or her possession count is not what she remembers about that day.

“When everyone stepped out onto the race for that first game, you could see the banner and for me it was surreal,” she said. “I grew up looking at the Collingwood players, wishing I could be them but they were obviously men.

“Everyone says they got teary, which is a sign of how much we had put into it and the fact that we were actually there. To me, the fact that my parents could watch me from home on TV was something I appreciated.” She played every match in her debut season, ranking second for tackles and third in clearances in the league. She placed 3rd in the GWS Best & Fairest Gabriel Trainor Medal in 2017 and managed to play all games in the 2017 and 2018 seasons of the AFLW before taking 2019 off to “live a normal life”.

“I graduated uni in 2017 so I never really had the chance to settle down with a job,” she said. “My job applications were being knocked back because I would tell them that I would go to Sydney in November and people were hesitant to hire me.

“I wanted to step back and live a normal life for a year and see how if I missed it enough to go back. It was tough but that made me strive hard to get back there with the Giants.

“I can’t sustain playing football on its own but we all understand that it has got to start somewhere so if we were the catalyst of making it better for the girls coming after us, it will be worth it.

“I said numerous times in that first season that I would have played for free which I would again. It is hard managing living a normal life and playing footy but at the same time, this is something I take pride in and I will make any sacrifice for it.”

The Preliminary Finals of the AFLW competition run out on to Ikon Park and the Adelaide Oval this weekend, no...
Read More