Local frustration around climate action took the first flush of headlines around the Acting Prime Minister’s visit to the Bega Valley yesterday, masking some worthy local projects that had ‘their moment in the sun’ all be it flanked by bush fire smoke from afar.

Michael McCormack started his day at the Bega Saleyards were he opened new facilities aimed at improving animal welfare and making the space more comfortable for local farmers, buyers and sellers.

The upgrade includes rubber matting in concrete livestock pens, an open bay with shade and a rainwater tank.

“The Bega Saleyards support more than 2,000 buyers and sellers from across the region every year. These important upgrades will improve the safety, accessibility and functionality of this site supporting the local agricultural community,” Mr McCormack says.

The Commonwealth awarded Bega Valley Shire Council $1 million for agricultural projects – $790,000 was spent upgrading the saleyards while the remaining $210,000 funded fencing materials and labour to help local landholders impacted by the Yankees Gap Bushfire in 2018.

The new-look Merimbula Visitor Information Centre was the next stop for the Nationals leader, who is in charge while Prime Minister Scott Morrison holidays with his family.

A $50,000 Commonwealth grant has helped create the stylish new centre opposite McDonalds.

Bega Valley Mayor Kristy McBain says the new space represented a great show of support for the future of tourism not only in Merimbula, but across the Shire.

“The new home has provided the dedicated staff and volunteers with a site befitting the wonderful work they do to promote our Shire as a destination and our local businesses,” Cr McBain says.

The opening of the new terminal at Merimbula Airport came later in the day, where Mr McCormack encountered around 40 passionate climate protesters. The Acting Prime Minister, who is also the Minister for Infrastructure, Transport and Regional Development, says the construction of a new arrivals terminal and secure luggage holding area along with a carpark expansion would increase the airport’s passenger handling capability.

“These upgrades have improved accessibility, safety and capacity which means Merimbula Airport will now be able to service more passengers and a wider range of passenger aircraft, supporting business and tourism to this wonderful region,” he says.

An estimated 60,000 travellers will use the upgraded terminal every year, the works made possible by a $1.2 million Commonwealth investment and $3.2 million from Bega Valley Shire Council. Jenny Symons, Council’s Project Manager says she is grateful for the patience shown by passengers and the community during construction.

“We had them in a temporary terminal, we had car parking changes and limitations – we hardly had any complaints, more constructive feedback we tried to follow through on,” she says.

“I think people could see what we were trying to do and they were supportive.

“It was lovely watching that first flight come into the new arrivals hall, a great reward for a strong team effort.”

More works are to follow with the NSW Government allocating $4 million to relocate the general aviation area north of the existing space. Council is also currently seeking feedback on the Environmental Impact Statement tied to the long talked about runway extension. With the Acting Prime Minister in the sky and headed back to Canberra, a spectacular new walkway with sweeping ocean views was opened linking Tathra Wharf and Tathra Headland by State MP Andrew Constance and Cr McBain.

“This is a tremendous asset for the local community that showcases Tathra’s history and will be a tourism drawcard for the region with its stunning views and whale watching opportunities,” Mr Constance says.

“I am incredibly proud that the NSW Government funded the $1.2 million for design and delivery of this important project.” The Tathra Headland Walkway is an all-abilities 300-metre walkway featuring a series of elevated boardwalks and walking paths, as well as an elevated viewing platform providing views of the humpback whales’ annual migratory route.

Recycled bridge timbers have been used in the boardwalks and whale watching platform.

Cr McBain says, “the iconic walk that has been created is a testament to the vision, passion and dedication of the Tathra community.”

“The successful completion of this project fits perfectly with the commitment of our Council and the broader community to establish our area as a ‘must-visit’ destination.” 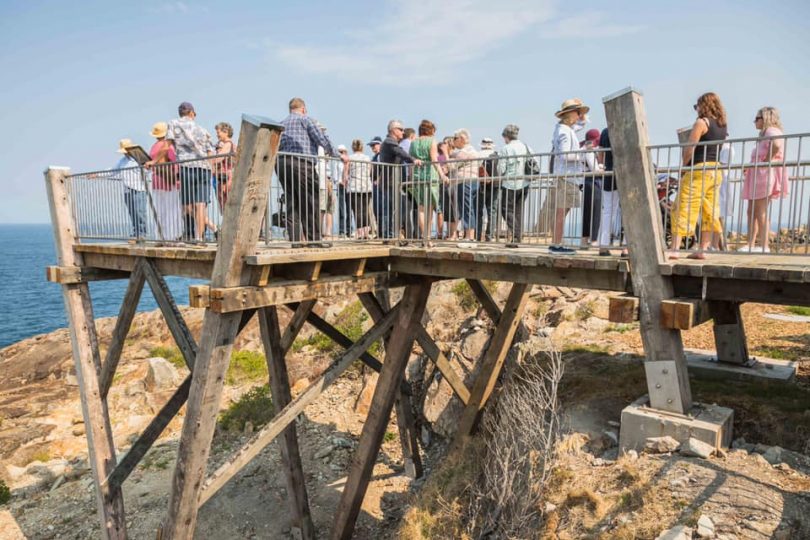 If you're feeling at a loose end during the second weekend of February, there's a bushel of reasons to head...
Read More