Batemans Bay’s seaside location is guiding a vision for the town’s future, with the Business and Tourism Chamber inspiring a plan that includes floating pontoons in the CBD and a pier off Hanging Rock for cruise ships to pull up alongside.

Lead by newish president David Maclachlan, the Chamber is making the most of the State Government’s pitch for big ideas that need funding.

Spruiking on Facebook, the Member for Bega and NSW Transport Minister, Andrew Constance said, “We’ve got a $1.3 billion fund, the message to the community is get out, push your councils, push your mayors, push us, look for great projects.”

Floating pontoons seem more feasible at this stage compared to a fixed pier at Hanging Rock. Current pontoon planning still accommodates cruise ships in that it might cater for cruise ship tenders as opposed to ‘a mothership’ that perhaps needs a purpose built fixed structure to tie up to.

Access for all seems to be a driver in the Chamber’s pontoon push, inspired by what is being achieved by ‘The Bay Push’ an the inclusive playground at Batehaven.

“The proposal is to install a wheelchair hoist on the proposed pontoon and at the existing Hanging Rock boat ramp,” Mr Maclachlan says.

Primarily though stimulating the local economy and tourism industry is at the heart of the Chamber’s plan. “Without floating pontoons, there is little practical recreational boating access to the CBD,” the Chamber chief says.

“There is no mooring point at which the boating public can get a coffee, groceries, or bait and fishing tackle.

“There are few public wharfs available to boat owners and what is there is of such a height that it is largely unusable by recreational craft,” Mr Maclachan explains.

In a report presented to those who can make this stuff happen (NSW Ports, NSW Roads and Maritime, Regional Development Australia, Eurobodalla Shire Council) the Chamber also points to seaplane movements.

“The seaplane operators are now licensed to land on the water adjacent to the CBD, yet do not have pontoon access,” Mr Maclachan says.

“The seaplanes feature in Eurobodalla and Tourism Australia’s national and international marketing for the region.”

According to the Chamber, the plan has been received positively by the NSW Government. About Regional sought comment from local member, Andrew Constance, and Maritime Minister Melinda Pavey.

“The proposal has been internally submitted within Roads and Maritime Services for funding,” Mr Maclachlan says. 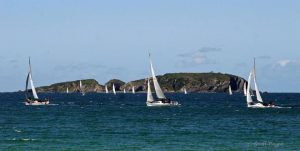 “When you look at these projects that deliver tourism infrastructure into our shire, the potential is fantastic, Cr Innes says.

“But we need to be realistic about the environmental constraints.”

The Mayor points to wave action within the bay that perhaps impedes pontoons, and that Council is seeking expert advice.

“Council is really keen to look at these kind of projects that the Chamber is bringing forward, we really commend them for thinking outside the box and having the courage to step up, but we do need to have a look at those environmental concerns,” the Mayor says.

“There is a little bit more involved in the engineering to make sure that they [the pontoons] are stable and that long term the maintenance doesn’t become a huge burden and an issue for ratepayers.

“But in this day and age, the engineering solutions are just incredible, we’ve just gotta make sure we get it right,” Cr Innes says. The Mayor is clear that Council has no capacity for funding such a project and that environmental considerations need to be explored further, but she is keen to see the idea succeed if feasible.

“It’s important that we take the time to ensure what we do now doesn’t create issues in the future,” Cr Innes says.

“We have a really good working relationship with our local member [Andrew Constance] and he is very keen to see benefits from the State flow down to this region in particular.”

“You see it in Sydney Harbour and up on the Hawkesbury,” Mr Maclachlan told About Regional.

“Our largest industry is tourism, we need to keep growing and always look to do better and provide more – everyone benefits.

“Private and public tourism infrastructure has been identified by various studies as a solution to local employment issues and increasing visitor spend,” he says. 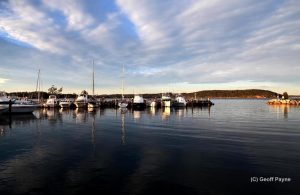 The Chamber’s pitch is just part of the Batemans Bay buzz at the moment, which not only includes a new $300 million crossing of the Clyde River but plans for the old Batemans Bay Bowling Club site, MacKay Park/Batemans Bay Pool precinct, the Bay Link Road project to the Princess Highway, and Council’s CBD streetscape makeover.

“There is massive momentum Ian, an indoor aquatic centre and an arts and cultural centre are extremely exciting possibilities,” Cr Innes says.

“Both Andrew Constance and myself have made very strong commitments that that is something we want to see delivered.

“All this will have flow on affects for the whole Shire because it is a gateway site,” Cr Innes says.

The new bridge is locked in, the Batemans Bay community waits to see what the NSW Government’s $1.3 billion booty might deliver next.

*Thanks to Rebecca Henshaw at Livefire Batemans Bay for video production

Love for Batemans Bay needed now more than ever

With the Currowan Fire still looming in the landscape as a threat to all who love Batemans Bay and surrounds,...
Read More

On a balmy afternoon this week, two more sculpture were unveiled to permanently adorn the waterfront at Batemans Bay. The...
Read More

Recent campaigning to address concerns with the entrance to the Clyde River at Batemans Bay has lead to action, with the...
Read More