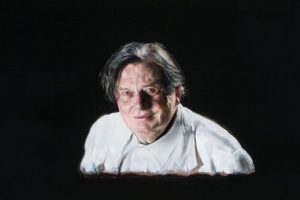 Barry Humphries is and isn’t coming to regional NSW.

I hope you can forgive the click bait in the headline.

Click bait has a tendency to let you down, but I am confident that the opportunity my Barry tease represents won’t.

The Art Gallery of NSW will dispatch the Archibald finalists to Ballarat, Wagga Wagga, Cowra, Bega, Hawkesbury and Dubbo between October this year and August next year. 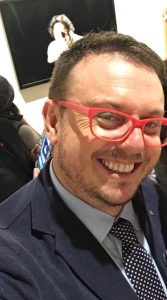 Iain Dawson selfie with Barry, winner of the 2016 Archibald Prize

He has already seen the 51 finalists up close, and was there on the night to hear Louise Hearman’s name proclaimed as the winner.

“It is the biggest visual art event on the calendar, so it was great to be there,” he says.

“Particularly because the Archibald will be touring down to Bega in March next year, (it was great) to see the works and meet some of the artists.”

The Archibald generates a level of discussion in the community unrivaled in the arts world.

“Let’s look at some new fresh talent that’s coming through, I think its (Barry) a bit of a safe choice.” he says.

On reflection Mr Dawson accepts that picking a winner is hard and not a job he wants. “I really enjoyed Guy Maestri’s portrait (Shattered) this year, I enjoyed Abdul Abdullah’s portrait (Titled, The Cost – seen here) as well, they jumped out at me,” he says.

This year’s Archibald has 10 more finalists than it normally does, and Mr Dawson will be the caretaker of these precious works between March 24 and May 13 next year.

“We’ll be stretched to host every single one of those.”

“I am a bit…not worried but I know that the Tweed Regional Gallery had 29,000 visitors to it’s Archibald Tour, so it is a bit daunting to think there might be that many people coming through the Gallery,” Mr Dawson laughs.

“One of the pieces in the show is 20 cm too tall for us to hang on the walls, so we won’t be able to take that one unfortunately.”

It’s a problem that highlights one of the issues the newly appointed Gallery Director is hoping to overcome with a small renovation of the space.

The strategic plan for the Gallery points to a make-over that delivers a space better able to cope with the needs of a touring exhibition.

One option being discussed is pushing through the wall to the old Bega Valley Shire meeting chamber next door.

Despite the height problems with one of the Archibald finalists, portraiture is something that has always hung well in the Bega Valley Regional Gallery through the biennial Shirley Hannan National Portrait Award.

Established in 2002 by Mrs Hannan herself, a gifted Bega Valley portraitist in her own right, the 2016 award carries a $50,000 purse, just a couple of rungs below the $100,000 pay day Lousie Hearman recently had at the Archibald.

That exhibition with it’s 25 finalist is on until August 20.

As he moved around the crowd at the Art Galley of NSW on the night the Archibald winner was announced, Iain Dawson says he found himself being asked more and more about the Bega based Shirley Hannan National Portrait Award.

“We’ve got four artists who are finalists in our show, who are also finalists in the Archibald Prize,” he says.

Around 140,000 people are expected to visit this years Archibald exhibition in Sydney, in Bega Mr Dawson says the previous attendance record for the Shirley Hannan has already been broken with an extra 1000 people through the door so far compared to 2014.

“Why (do) audiences respond so well to portraits?,” Mr Dawson ponders.

“I think because we are saturated with images of people constantly in advertising, in media,” he says

“I think there’s a comfort in looking at depictions of humans, and I think because it (portraiture) has gone on for so long, there’s less of a scary quality about it, for audiences to come and actually enjoy what they see and actually have an opinion about what they see.”

The 2016 Archibald Prize continues until October 9 at the Art Gallery of NSW in Sydney.

The touring exhibition, including the winning portrait of Barry Humphries will stop by: