There is a real thirst for a deeper knowledge and connection with local Aboriginal culture, experience and people.

Events like the Giiyong Festival of 2018 in Eden attracted around 6,000 people and highlighted a genuine interest from across the community that on one level is tied up in ambitions about reconciliation but also and more simply – having fun and learning something new.

This weekend presents another opportunity for people to gather and share in the Indigenous culture of the region.

Inspired by Bruce Pascoe’s critical work, Dark Emu, this initiative principally seeks to honour, repair and reinstate the intellectual and cultural heritage of the Yuin Nation through the creation and cultivation of a bushfoods garden and Djiringanj language program. With a view to lending light to the longest night of the year and to fire up a weekend of activities the preschool invites you to a Winter Solstice fire ceremony prepared by Narooma High School students and local senior mentor group -The University of the Third Age.

Fire ceremony on Friday (June 21) will start at 5:30 pm with lanterns, fire-gazing and singing to Dhinawan – the Dark Emu in the stars. The event is free however participants are asked to bring a cup, bowl and a hot soup or casserole to share.

To celebrate recent milestones with the project, on Saturday (June 22) there’ll be an evening of discussion with Yuin writer and historian Bruce Pascoe, revered Indigenous artist Cheryl Davison and natural bee-keeper Adrian Iodice.

The focus for the night will be the role of honest story-telling and caring-for-country in the nurturing of a prosperous society.

Held at the Bermagui Community Centre at 6 pm and MC’d by South East Arts’ Shanna Provost, this event coincides with the launch of the highly-anticipated junior version of Bruce’s book, ‘Young Dark Emu’.

To round out the weekend, the Moodji team invites the community to join Bruce and Cheryl around a ceremonial fire on Sunday (June 23) at 10 am and learn how to make string from Indigenous fibers, the end goal is the construction of a 30 meter bamboo trellis for the farm project.

Sunday’s activities will also include propagating Indigenous bushfoods, garden bed building and a tour of the project site behind Bermagui Preschool. Entry will be by donation with light refreshments provided. Participants are asked to bring a cup, hat and gloves. 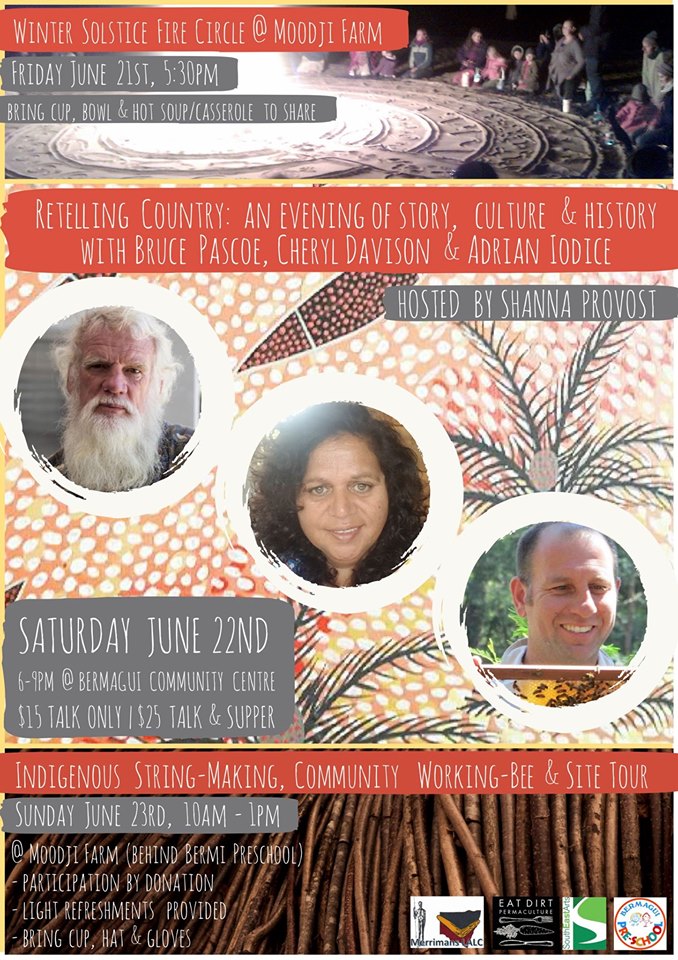