Toad and Mandy, our region’s newest celebrities talk to About Regional Toad and Mandy went from being dairy farmers to House Rules winners. All photos supplied by Channel Seven.

Two down-to-earth dairy farmers from Candelo, south-west of Bega, have became the region’s newest celebrities when they won House Rules – a “life-changing” event which has given them a healthy bank balance and a fully renovated home.

Last Monday night, Toad and Mandy took out the grand final win in the sixth season of Channel Seven’s hit program, House Rules by just one point – scoring themselves prize money of $355,000 in the process.

Viewers had earlier found out that their newly-renovated house (both inside and out) and farm were now valued at $1.1 million – an increase of $250,000 over the property’s valuation of $850,000 before the program started.

But as the dust settles on their win – and their drought-affected farm – what was the House Rules’ journey really like for Toad and Mandy? What does the win mean for them and how are they coping with their new celebrity status?

About Regional caught up with them to find out.

What are they going to do with the money? 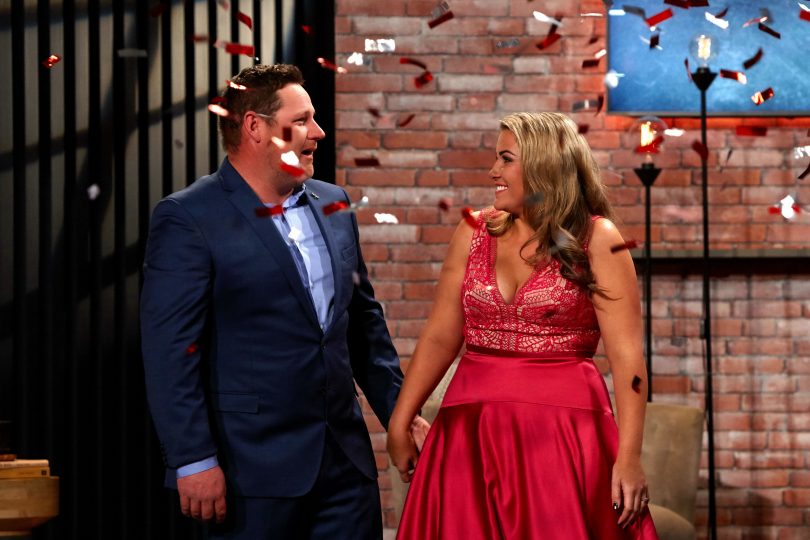 Toad and Mandy after winning the House Rules grand final.

Given their country values, it’s probably no surprise to find out that Mandy says: “We won’t be blowing it”.

“We will pay a few debts off so our future is a bit better,” Mandy said.

“We will probably organise a wedding – we haven’t even had time to think about that since we got engaged.

“Then I think we’ll upgrade Toad’s work ute,” she said.

“Eventually we will put in some money to set up my beautician business.”

Mandy is a qualified beautician and down the track, she is hoping to open up a salon and gain herself a full-time job.

Judging by Toad and Mandy’s Instagram account, some of the money may also be spent on buying hay for their drought-stricken farm, with Mandy commenting that hay supplies are running out everywhere.

“In all seriousness, most of Australia is in drought and that includes our farm. Our farm is just holding on but others are dwindling fast,” Mandy wrote in a post.

Did they have any home renovation skills before starting House Rules? 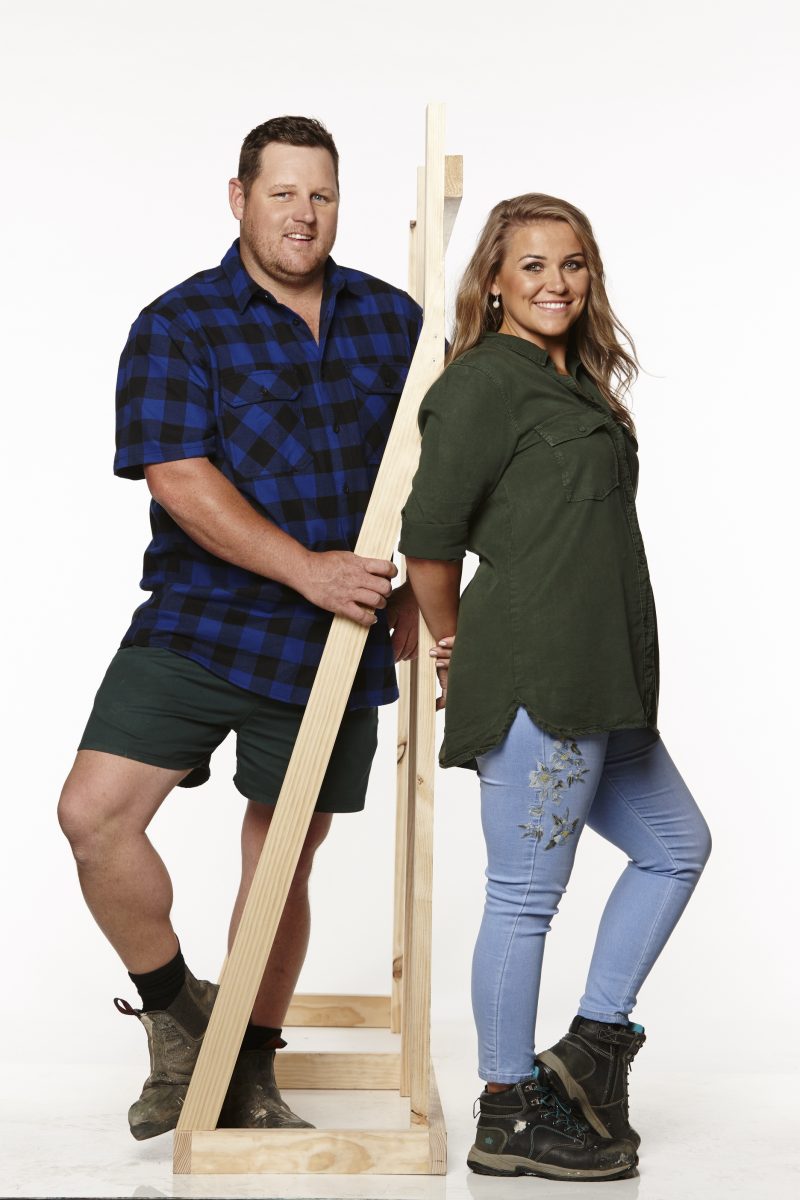 Toad said that before starting House Rules, he had “no idea” when it comes to home renovation skills.

Mandy also didn’t think she had any prior skills but agreed that she did have creative ability.

“I do have a bit of a creative hand – I do a bit of painting and craft,” Mandy said. “I never thought I could design a whole room.”

Mandy said that going in she lacked confidence and never thought she would be able to do so well.

“I think after the first few weeks that we got scored it got better and better.”

A particular point of achievement was that they “never got in the tent”- the place the contestants with the lowest scores have to live during the next renovation.

Mandy recalls that Mel and Dave just kept beating them by one or two points and this was difficult but, of course, in the end, they won the most important contest – the grand final.

Toad said that he thought it was good they went into the competition with an open mind and then learned from their experiences.

“I think it was very good that Mandy I did learn so quick,” said Toad.

What was the hardest thing about being on House Rules? 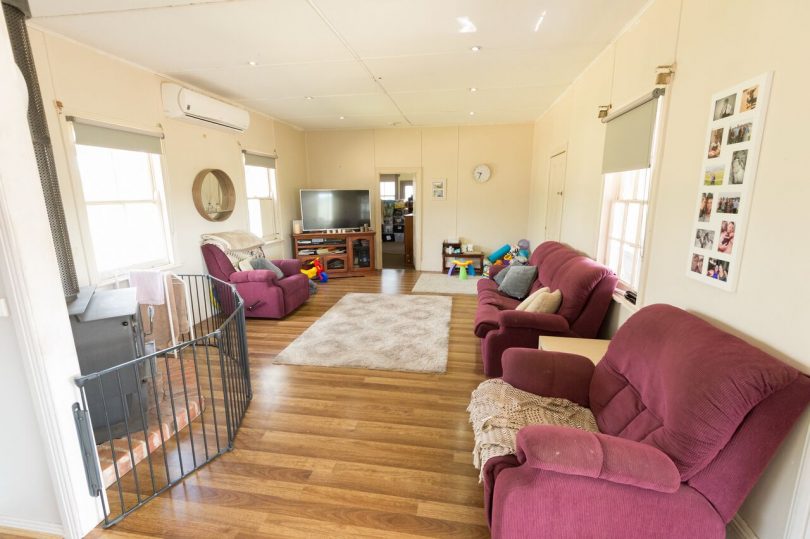 Toad and Mandy wanted a better home for their kids to live in. This is their old lounge-room. 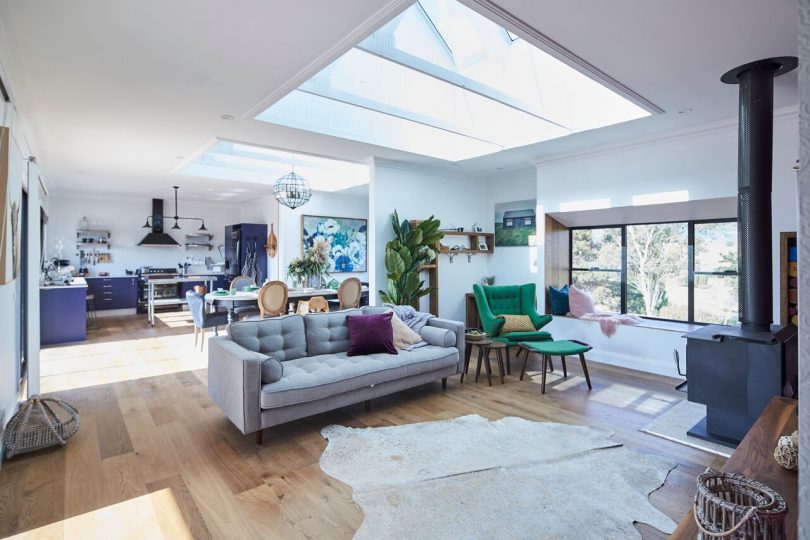 This is their new lounge-room.

Although House Rules went to air this year, Toad and Mandy (and the other contestants) actually started work back in October last year and Toad said it went for about six months, with contestants coming back just recently to film the final.

While being on House Rules meant a lot of hard work and sleepless nights, Toad said it also meant they were often away from their one-year-old twins, Lenny and Layla, for a month at a time.

Toad said that you can’t really have a phone call with a one-year-old and so Facetime made a real difference to them as they could see and interact with the twins.

In a recent Instagram post, Mandy said that they could not have competed on House Rules without the help of their families, and particularly their mothers.

“My mum Bev and Toad’s Mum Sharon along with our brothers, sisters and sister-in-law all shared the load of raising Lenny and Layla while we were away working hard in this competition to have the old farmhouse perfected for our kids so it was warm and safe to live in,” Mandy wrote.

“Every single day away from our twins was hard but we knew they were in the perfect hands.”

Toad said there were pros and cons to being on House Rules but the pros definitely outweighed the cons.

What was their relationship like with the other contestants? 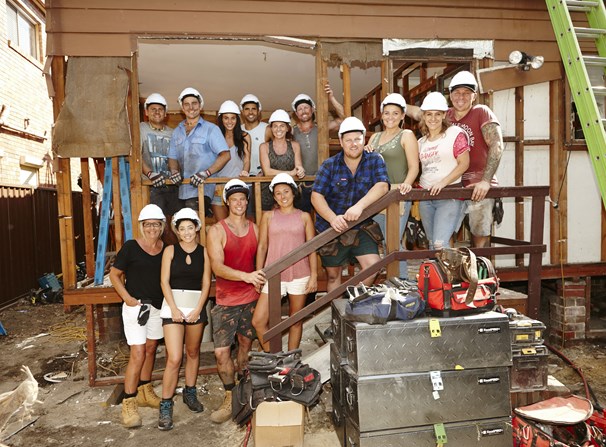 “We’ve got lifetime friendships with the whole lot of the other contestants,” Toad told The RiotACT.

“We will stay in touch with the whole lot.”

Toad said that while there were some differences between contestants on the show, this didn’t really involve them.

He said that they just treated everybody the same and got on well with everybody.

What is it like now to live in their newly-renovated house? 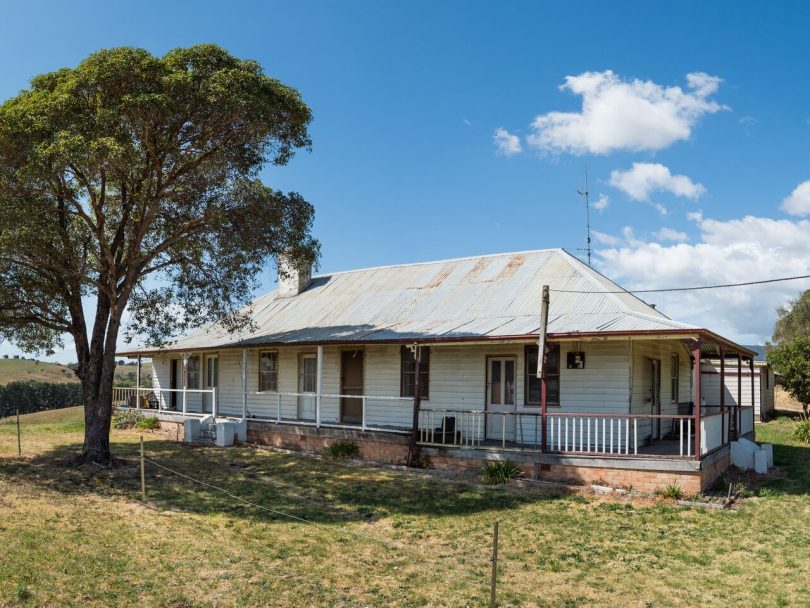 Toad and Mandy’s house before its renovation. 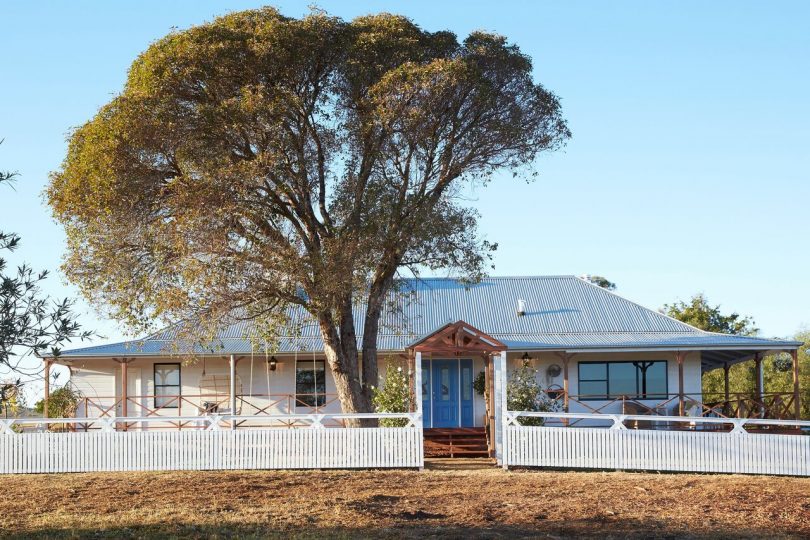 Toad and Mandy decided to go on House Rules solely because they were sick of living in a house that rattled during the wind, was freezing during the winter and which required them to walk across the deck to get to the bathroom.

Writing recently on Instagram, Mandy relives the process last July which led to them applying to House Rules.

“We had put the babies down and were sitting down watching the show. Toad reclined back on his 13-year-old handed down old couch while I’m sitting on top of the fire pretty much to keep warm and this is what was said:

Me: babe we could do this, this house needs the help, I’m going to apply?

Toad: yeh whatever if it saves an argument then go ahead! They won’t accept us because we live too far away from anything.

Yeh well, they did accept us, and look at us now.”

When asked by About Regional about how different it is to live in their newly-renovated house, Toad said:

“Every time we come in the house we say ‘This is awesome’. It’s so much more comfortable – it’s livable now.”

Toad described the many practical benefits – particularly having a warm, well-heated house. He said that recently they had a windstorm and before the house was renovated it would have lifted the carpets. This is not the case now.

He said the kids love their home too and can scoot around inside and have fun.

Finally, how are they finding their new celebrity status?

There can be little doubt that Toad and Mandy were a popular couple on House Rules and have become well-known among the program’s hundreds of thousands of viewers. Their Instagram account alone has 35,800 followers.

Asked how they are coping with their fame, Toad said it isn’t really any different where they live.

Candelo is a rural village with a population of around 300 and Toad said that the locals already knew them before they went on House Rules and they quickly found out about them going on the program.

He said this means that nothing has really changed locally and they can still go shopping in town without it making a difference. It’s mainly when they look at social media that they realise how well-known they have become.

“For someone to ask you for your signature is still a bit weird,” said Toad who explained that he was recently visiting the Snowy Mountains and he was asked to sign someone’s pizza box.

Whether the fame lasts or not, Toad and Mandy and their twins will be able to continue to enjoy their stylish, renovated country home – including the delights of sitting by their new sunset bar looking over their property. 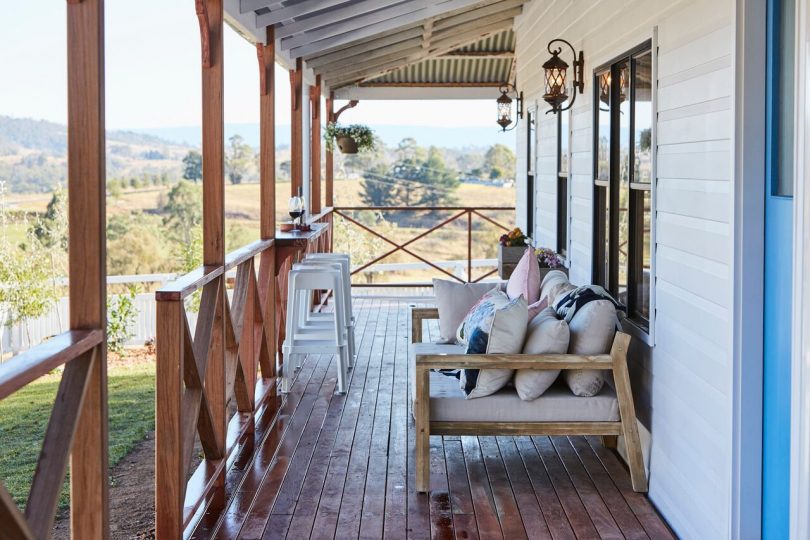 The new sunset bar at their home.

“It’s hard to take it all in… on that first day you start with nothing and end up with that, it’s massive.”

Tongue-in-cheek disclaimer from the writer: I have a vested interest in Toad and Mandy as I watched House Rules and supported them from day one. Who could go past a bit-of-a-larrikin named ‘Toad’ and a woman named ‘Mandy’ who just radiates loveliness? Added to that, they both live in our region. Normally the fact that I was supporting them would mean they had absolutely no chance of winning. So they really did overcome insurmountable odds!

2 Responses to Toad and Mandy, our region’s newest celebrities talk to About Regional

Good on them & I`d love to be sitting on that lovely verandah with them enjoying a hot cuppa & scones with Cocvky`s Joy & enjoying the lovely view…….I miss Australia & can`t wait to get back with my most wonderful Chinese wife & introduce her to the best country on earth.

Yay. So glad they won. So lovely, so down to earth.