The slow, gentle process of deep observation is intrinsic to many forms of art.

It can have much in common with scientific observation; there’s attention to detail, appreciation for form, system and structure and an experience of wonder.

When we mix the two, what can we create?

A group of artists has created a showcase of squidgy, surprising subjects – invertebrates.

Invertebrates are animals without backbones, as the exhibition title suggests.

The idea of getting around without a backbone might seem odd to us, but really we’re the odd ones out because invertebrates make up 97% of animal species.

“Spineless: an invertebrate exhibition” opens this Saturday (September 17) at Mister Jones in Bermagui on the Far South Coast of New South Walse. Curator Matt Chun says group exhibitions have become a regular part of the Mister Jones calendar, something he really looks forward to.

“These shows are a lot of fun and also present an opportunity for me to work as curator, with some excellent creative friends from within and outside the region.

“Launching an exhibition is also a good opportunity for a street party and these exhibitions are well-attended community events,” Matt says.

The show includes the work of 9 emerging and established artists and illustrators, interpreting the invertebrate theme through a wide variety of subject and media, including soft sculpture, illustration, painting, assemblage.

Matt says the inspiration behind the exhibition is a love of the complete ‘other-ness’ of invertebrates.

“They seem to exist at the outskirts of a person’s definition of an animal, often appearing to have more in common with plants, for example.

“And, often having no eyes or recognisable mouths, they naturally resist an artist’s impulse to anthopomorphise,” Matt explains. “I love bluebottles for example, as they disrupt all our expectations of what a ‘creature’ should be; each bubble is in fact a co-operative colony of individuals, both startlingly simple and incredibly complex.

“The other dichotomy of course, is a marine invertebrate’s alien beauty; often with a lolly-shop palette of colours, jewel-like luminosity and elegant movements, yet still evoking in us a deep, primitive revulsion.

“I’m also interested in the common status of invertebrates as the lowest form of life, as though they are yet to evolve true animal qualities; when in fact they are perhaps the most perfectly efficient life-forms, and may have absolutely no interest in evolving our troublesome eyes, thumbs and social graces,” Matt says. 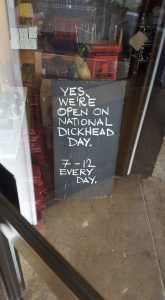 When he’s not on artists’ residencies in places like Taipei, Sydney and Canberra, Matt operates Mister Jones in Bermagui, where he creates coffee and art side by side. In January, Matt was the subject of abuse and vandalism after he expressed his disdain for Australia Day nationalism on a cafe chalkboard.

The term ‘Spineless’ just occurred to Matt as a funny and catchy reference to the invertebrate theme.

“It is our first exhibition since the national media furore that engulfed my business around Australia Day,” Matt says.

“So a lot of people are assuming that the exhibition title suggests something more provocative. In fact, I conceived of the show well before January, but this does add another accidental layer of humour to the proceedings.”

Pic 4: The chalkboard at Mister Jones that caused a stir on Australia Day 2016