River Cottage Australia at Central Tilba has been sold.

The new owner of the River Cottage Australia property at Central Tilba on the New South Wales Far South Coast is a 36-year-old single builder from Sydney looking for a place to put roots down and call home.

Tristan Diethelm says he is comfortable with the price he paid for the famous TV set but wouldn’t reveal the final figure.

“Considering it was River Cottage, I am sure I paid a bit more, but opportunities like this are rare,” Tristan says.

Reportedly listed for $895,000 in late April, Tristen told About Regional that the 9-hectare property was a dream come true.

Bermagui based real estate agent Julie Rutherford was the exclusive agent and says it was a real thrill having such a famous listing on the books.

“The fact that it was the home of River Cottage was a factor in the level of interest,” Julie says.

“But there were also many buyers who were attracted by the size and quality of the land, the beautiful Tilba landscape, the character of the home and the temperate climate of our area.” The sale comes after production of the TV show wrapped up at the end of season four late last year, much to the distress of fans.

Host Paul West has also moved on, his young family settling into Newcastle in recent months.

“We’re keen to get back to the South Coast in the next couple of years, especially as Otto gets ready to start school,” Paul says.

“I was so busy with the show, I needed to reconnect with family and take some time out and keep a low profile.”

The new owner of the property says he is keen to carry on the principles Paul put in place.

“I want to tap into local food and the community, that’s part of what attracted me in the first place,” Tristan says.

Currently living in and renovating a terrace house in Paddington, Tristan has plans for the Punkalla Tilba Road property.

River Cottage will be open for holiday rentals in time for spring 2017. 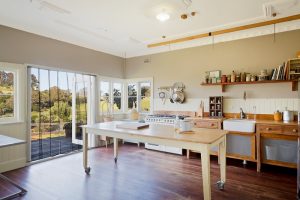 The heart of River Cottage Australia – the kitchen.

“It will be a place where family, friends and I can escape to, but I will be listing it for holiday rentals on Airbnb soon,” Tristen says.

All the animals that starred in the show alongside Paul were sold off late last year, the veggie beds remain and have continued to produce under their own steam, indeed a carrot from the River Cottage garden has become somewhat of a trophy for locals.

“I’ve pretty much bought the place as is,” Tristan says.

“Most of the furniture and what people saw on TV comes with the property, so it will feel like a River Cottage experience to fans of the show who want to stay.”

Being handy on the tools, the new owner also sees great potential in some of the property’s other buildings.

“The bedrooms in the house need a little bit of work, and the old dairy and silos could perhaps be turned into further accommodation,” Tristan says.

The vendor in the sale wasn’t Paul West, the property was owned by British TV production house Keo Films. The new owner of River Cottage sees great potential in the properties out houses.

David Galloway, Executive Producer and Director of Programmes at Keo says, “After several seasons making the show and watching Paul grow the property it was a hard decision to sell.”

“Unfortunately without a TV commission, it was a business decision in the end.”

Up until tonight (July 3) the show was only available on pay TV and DVD, but SBS will screen all 64 episodes weeknights at 6pm, opening the show and the South East of New South Walse to a whole new audience.

“Who knows where that may lead to in terms of future programming,” the Keo TV boss says.

“It also gave the company a production base in Australia from which other highly successful Keo formats – like Struggle Street’ (SBS) and ‘War on Waste’ (ABC) have been produced,” Mr Galloway says. As the new owner of the property, Tristan Diethelm chuckles as he confesses to only watching the first series of River Cottage Australia.

“But I’ve been looking for a property outside of Sydney for a while, there’s a buzz about the South Coast at the moment and I’ve been scanning the area for about a year,” he says.

“I am keen to nurture the property and would love to be working in the area down the track.

“There’s the beach nearby, a rural lifestyle, and a beautiful little town, it ticks so many boxes.”

While he lives in Sydney Tristan says he doesn’t feel like he has a hometown.

“My Dad is a yachtsman and we spent a lot of time sailing the world when I was young, so I am looking for a place to put down some roots,” Tristan says.

“And if Keo wants to film another series one day, I’d open up the property again for River Cottage.”

#Stay up to date with Paul West and his life after River Cottage Australia, Paul has made a new home in Melbourne and is working for the ABC – find out more. (June 2018)

It was the best show I have ever watched, it’s so disappointing to see it go, what a waste, I would love to see it come back.

River Cottage was such an inspirational show. We need more of this type of programme. We are never too old to learn from shows such as this. Please let’s hope there will be another River Cottage soon for us all to enjoy.

dear paul i totally love your show and watch you all the time .it is my dream to have a lovely farm one day and have learnt a lot from you with cooking and the way you slowly build up your farm .I would love to come that way soon .I have a border collie named Teddy and he watches your show with me .Your lovey puppy digger is so much like Teddy was when he was little. Keep up the great work .Your amazing Regards Petina stevens

Hi! I only found the very last of the series on our chanel 188 a few days ago and was so surprised by it and then quite disappointed when i learned that it was the end of the series. I loved the scenery around the pretty cottage and Ithink Paul and was a really good host. I also liked the neighbours and the way they all
Pitched in tohelp. I have been an avid reader of especially Australian outback novels and the wonderful series of McClouds Daughters. I so wish that they will continue the series. My husband was a builder and two of myfour sons carried on the trade. I am now a widow of nearly five years and somehow have always loved to resd and watch anything Australian. I now at 80 years young!!! I live in a very small private complex at a small town called Henties Bay on the west coast of Namibia. I still drive my car where ever I need to go and have quite a few hobbies with which I keep myself busy. Good luck to the new owner I hope he will be happy there. God bless and keep up thegood work.
Joan le Roux

I feel totally angry at the tv company that shut down this show. I, and so many others, learned so much from Paul’s journey on the farm, and it was an absolute pleasure to watch it. It’s such a shame that everything is about money now.

being a ex pat pom i remember the very first episode of river cottage uk, and attended the opening of the farm when hugh,i moved when on a trip back home, unfortunately hugh has gone too commercial, his prices are astronomical though i still subscribe to his web site to keep up to date,that is what i loved about paul and the aussie show,so simple and it is a crying shame it has gone,i see that paul has moved to thornbury vic,growing pumpkings in his front yard a few doors down the road from where i had a shop,good ludk in your future endeavours mate i am sure you will be back on screen soon.

Hoping to rent, one holiday soon! A week in paradise!

My husband and I eagerly watched every program of River Cottage Australia and found it so informative and much better than the UK venture. Paul West absolutely brilliant and taught us a lot. Digger we will also miss. Some of the characters in the towns and the ventures Paul took us on made superb viewing. I hope Tilba Tilba was not affected by recent bushfires, We wish Paul and his family better things to come if that is possible after River Cottage, and we would definitely buy his book. Paul is a very charasmatic character and was a great choice in his roll at River Cottage Australia.
Thank you for all in inspiration.

Gave up to easy. Should of tryed harder. Great opportunity lost. Hugh must of been so disappointed.

Thank you Ian and others who compiled this segment and info it is nice to know a bit more background of River Cottage it’s history before and at the present time and plans for the future as well. We are truly blessed with living here on the South Coast and as those who love living here it is known as Paradise the area has a lot going for it

Can we come and stay

We have family in the Bega valley so this would be a great ‘bolt hole’. Looking forward to it. Keep me posted.

What happened to Paul West and the River Cottage?

Ever since Paul West burst onto our television screens back in 2013, people have been fascinated by the sort of...
Read More

A trip to historic Tilba and the Tilba Dairy is always accompanied by a sense of anticipation. What have owners/dairy...
Read More