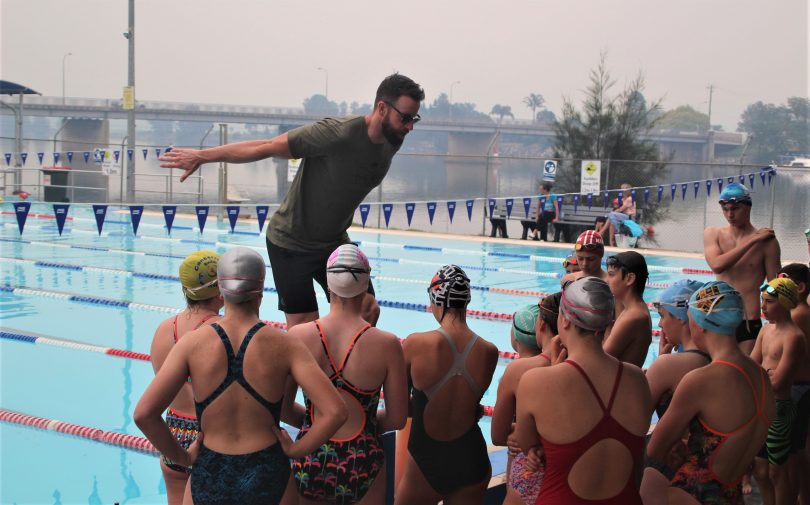 The South Coast’s up and coming swimmers have had a chance to learn from three of their Olympic heroes in a special swim class held at Moruya Pool on Monday.

Under smokey skies, around 70 kids attended the special clinic to glean a few tips.

“Having James, Josh and Jarrod [here] was a great boost to our kids,” President of the Moruya Amateur Swimming Club Jo Piggott said.

“After everything we have been through the past couple of months, to have them here sharing their knowledge and experiences was absolutely amazing. We thank them from the bottom of our hearts.” For the three former Olympians, who had held a similar event at Cobargo the day before, it was important to give to communities that had suffered during the summer’s bushfires.

“I think, given the current circumstances and what’s happened here with the fires, that’s the right thing to do,” said Magnussen.

About 70 young swimmers from the Moruya area came to share in the training.

“This has been one of the biggest clinics yet,” said Magnussen.

“It’s a passion of mine, visiting regional areas. I’m always on the look-out for talented swimmers.” The clinic was organised by Moruya Swimming Club with support from the Eurobodalla Shire Council and pool managers Eurobodalla Aquatics.

When Thomas Ashmore opted for shooting over rugby in his final years at St Francis Xavier Catholic College in Canberra,...
Read More

As the Far South Coast begins to put together the pieces of a horrific end to 2019, the two men...
Read More