This teapot, which once belonged to Gundaroo stalwart Mabel Whittaker, could tell a few stories. Photo: Sally Hopman.

Once there was the wisest of women. Her name was Mabel Whittaker and she was a neighbour in Gundaroo about a decade ago.

It was at a time when Gundaroo was a little rural community, a place where Mabel knew I had moved in next door almost before I had signed the contracts. 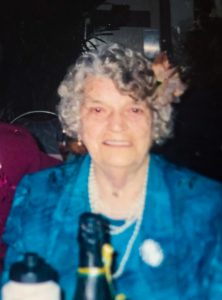 Her wisdom knew no bounds. She could do anything. Cook like a show champion, knit as if she were part-blanket herself. Crochet rugs that looked like bought ones. She knew everyone and everything that mattered.

Gunning Council staff used to ask her where people were buried in the Gundaroo cemetery. And of course, she knew all their secrets.

She’d get her chores done first thing and then either come next door to me for a cup of tea or drag out her milk crate and sit in front of her house with a little job that would keep her busy but not so much that she’d miss seeing who was driving where and with whom.

I learned so much from her. How not to waste water – we shared the water tank out the front as the rainwater from the gutters of both cottages ran into it.

I learned the difference between morning wood (kindling) and other wood. She heated everything in her house from the fuel stove, which she kept going constantly until, shortly before her death, she got an electric hot water service installed.

She taught me that, even on the hottest of days, nothing was more refreshing than a cup of tea. That if I didn’t keep the grass cut to within an inch of its life out the front of my place, she’d do it.

She made the best tea. Not just because it always came with her homemade biscuits, but because it came from a blue and white Willow pattern teapot that was stained brown with use inside. A right royal gift from Mabel Whittaker to her neighbour. Photo: Sally Hopman.

After Mabel died and her house sold, the new owners found the teapot in a cupboard and gave it to me. I cherish it, along with the pieces of crockery, featuring the royal family, she gave me after I admired some in her collection.

I learned she could be on her deathbed but if I told her I was going into town and did she want to come for a drive, she would always say yes. No matter how little notice I gave her, she’d be ready waiting outside her place by the time I closed my door.

The one thing I didn’t learn from Mabel was to always wear a hat. She always did. And powder. Although she mostly wore the powder in a lump at the corner of her mouth. My fault, I never gave her enough time to dab it on properly.

She made me laugh. We’d chuckle at the silliest of things together. Like one of the first times I took her to the supermarket and she stocked up on dog food. She didn’t have a dog. I knew because I had enough dogs for both of us.

As I asked her why she was getting so much dog food when she didn’t have a dog, the checkout operator turned around with the most distressed of looks. It took me a while but I got it. Pensioner. Bare necessities of human food in trolley but lots of dog food. I burst out laughing, drawing a look of horror from the checkout chick. Mabel asked what was wrong. She laughed even harder – she’d bought the dog food for me because I wouldn’t take petrol money.

READ ALSO: How an icon came to call Gundaroo home

Over the years we had the best of times.

We drank beers one night when the water tank pump failed and she helped me fix it. OK, she fixed it. We drank more when some idiots let off fireworks and my pony took off like he was in the Melbourne Cup. She helped me search through the village for hours, only going home when I made her – she had started to sway with tiredness.

When I got home a little while later – I had to see if the pony had got trapped in the wine bar – Mabel was standing at her gate chuckling. The pony was beside her eating her roses. He’d already had her vegetable garden for starters.

Or when I gave her an aloe vera plant because she was forever burning herself, it became known from then on as Hello Vera. But the one that nearly had us driving off the road, was when, coming back from the optometrist, she said he’d diagnosed her with a floating rectum. Her retina wasn’t staying still either.

Around this time of year, it’s the anniversary of her life and death and I go to the Gundaroo cemetery for one of our chats. Wouldn’t miss it for quids.

One Response to Mabel Whittaker, a wise woman and treasured friend

Beautiful story of what it means to be neighbours. Thank you!