Frogs Hollow Flight School – “I will fight this into my old age.” Bega’s David Stocker, one of around 300 people who gathered in the Bega Civic Centre. Photo: Ian Campbell.

I say ‘almost’ because the panel’s refusal of the Development Application (DA) was what the community had really come to see yesterday (December 13).

Mr Stocker was one of around 300 people who gathered in the Bega Civic Centre, the final step in a 12-month  assessment of the idea, which when fully operational would have catered for 1,200 international flight students each year.

Striding to the microphone with his trademark black eye patch and cheeky smile, Mr Stocker asked the audience, including the three members of the SRPP, to close their eyes and imagine themselves tending to a thrip infestation on tomatoes growing in a backyard veggie patch. A quiet, peaceful pursuit that is part of a rural lifestyle.

Mr Stocker then simply and effectively made the sound of a small engine plane into the microphone, while his audience imagined the scene he had created, highlighting the mindfulness that would be shattered if the DA was approved.

The audience laughed and applauded the soundscape he painted, which demonstrated the concern the vast majority of people had come to raise.

Mr Stocker’s impersonation of his wife’s snoring was an added comic touch. The butt of Mr Stocker’s joke was a $10 million development that consisted of:

For as long as anyone can remember the site in question has been used by hobbyists including the Frogs Hollow Flyers, a recreational flying club, and the Bega District Model Club, a radio control model plane club.

The proposal by Sports Aviation Australia was geared towards the Chinese market with all-inclusive education and
accommodation packages, where students would undergo flight training in Light Sports Aircraft, also known as Ultralights or Microlights.

A fully operational flight school would cater for 360 students three to four times a year, flying Monday to Saturday between 7 am and 6 pm. Each student on average would need to complete 30 hours of flight training in order to sit for the Recreational Pilots Certificate. Three hours after Mr Stocker’s sound effects, the Civic Centre erupted as members of the SRPP started to share their deliberations and decision for refusal.

“I haven’t been able to come to the view that the intensity of this development and the subsequent impacts of that development are appropriate for the locality,” Alison McCabe said.

“We have heard [about] and come to understand the nature of that rural environment.

“Just because something is permissible doesn’t necessarily mean it is always appropriate for that site,” Ms McCabe said.

In summary, the panel seemed to largely endorse the view presented by Bega Valley Shire Council in their assessment report. That being that a number of matters remained unresolved, including:

Prior to yesterday’s determination hearing, 725 submissions had been received, 720 of which were against the proposal. The SRPP also convened a community hearing in August and heard five hours of testimony against the idea from 45 speakers in front of an audience of 400.

Member for Bega, Andrew Constance described it as “horrendous” yesterday.

“The entire community is saying no to this proposal,” Mr Constance said. 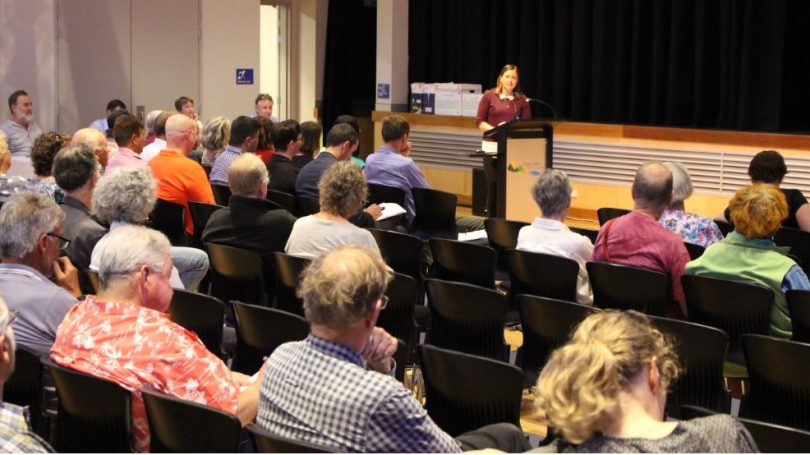 Mayor, Kristy McBain said, “Any adverse effects on our natural environment would have a significant economic impact.”

While the leadership of politicians added great weight, at the heart of the campaign’s success was a dedicated group of residents – Bega Valley Residents Against Frogs Hollow Flying School. Member, Bel Toohey, who lives in Newlyns Place to the south of the Frogs Hollow airfield says the panel’s decision was overwhelming and joyous.

“We’ve all had knots in our stomachs for the last year or so waiting and fighting,” she says.

“In the end, we were able to put forward the information that proved this development was not the right scale for this location.

“We are so grateful to every member of the community who has helped us fight this.”

Mrs Toohey and others in the group hope their win inspires other communities to stand up for themselves.

“First and foremost do not think that because you are a small community you can’t beat these multi-million dollar developments,” she says.

“It’s very overwhelming in the beginning but it’s a great opportunity for a community to come together and fight for a common cause – people power can win!

“We have learned a lot that other people could really benefit from, we are not sure yet how we are going to share that with other communities, but we are keen to pass that on. Around 300 people attended the determination meeting hosted by the SRPP, around 20 people spoke. Photo: Ian Campbell.

Mrs Toohey has only lived in the Bega Valley for three years, settling in a new home with her husband to raise their two children and live a peaceful life after stressful careers in the armed forces.

“We have made so many friends through this,” she says.

“As a new young family coming into the community this was the best thing that could have happened – we have met every one of our neighbours now – we have street parties and wherever we go we meet people who have been fighting against this flight school, we now have hundreds of new friends.”

For the record, Sports Aviation Australia contest that some of the figures presented to the panel in the assessment by Bega Valley Shire Council were incorrect and inflated.

Chair of the SRPP, Pam Allan suggested that the company’s legalese presentation was more in keeping with a pitch to the Land and Environment Court. She advised the proponents to better listen to grassroots needs and issues in the future.

Sports Aviation Australia spokesperson Stephanie Anderson told yesterday’s hearing that council had departed from due planning processes, she maintained that the development was consistent with the land’s zoning.

In a statement handed to media after the meeting, Sports Aviation Australia said it was disappointed with the outcome and would look at their appeal options. The community that has formed around this issue remain vigilant against any possible appeal or legal action by Sports Aviation Australia.

“Yes that remains very possible, but their development has so many holes in it and was found lacking in so many areas,” Mrs Toohey says.

“We will continue to fight them until there is no breath left in our body, there is not going to be a flight school here now or in the future – I will fight this into my old age.”