Sam Fletcher has been singing since a young age. The 18-year-old from Congo says music is his dream. And he also cares a lot about the environment.

The year 12 high school student from Moruya High, has written a climate action song, “Now or Never”, for the upcoming Federal Election.

Over 50 people turned up on Monday morning at Russ Martin Park, Moruya, to take part in the Climate Action Gilmore music video to go with the sing.

“Living at a place like Congo has made me understand how fragile nature is and how we need to protect it” says Sam.

“A lot of people seem to overlook the fragile platform of our lives.” 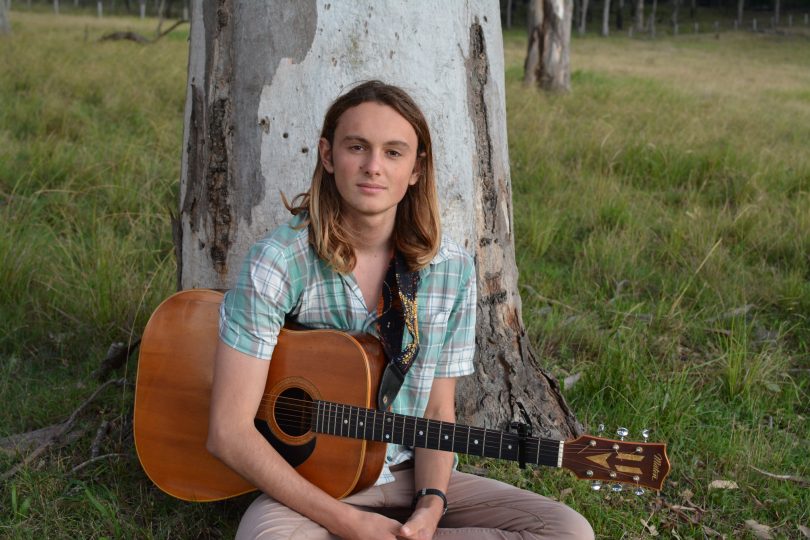 Sam has two streams to his musical performances. As an acoustic singer-songwriter he plays his own original pieces, inspired by the likes of James Taylor and John Martin.

Sam also has a rock band called ‘Kumera Patch’, which is musically inspired by the greats as classic rock like Jimi Hendricks and The Rolling Stones.

Sam writes most of the songs for the band, along with his 16-year-old brother Galen. Kumera Patch has played the Moruya Granite Town Festival, Nellijam, Cobargo Folk Festival, and at the Narooma Quarterdeck. At Easter they played at the Tilba Festival.

After a gap year next year Sam says he may go to university and study music and physics. He also loves maths.

Now or ever. C'mon Australia, have your say. 💪 350Eurobodalla worked to make this video for the climate action song 'Now or Never' by high school student Sam Fletcher, with Coastwatchers, Nature Coast Marine Group and the Southcoast Health and Sustainability Alliance working together as Climate Action Gilmore!Pledge to Vote #1point5 for policies that will keep dangerous global warming under 1.5 degrees >> http://bit.ly/vote1point5

Kumera Patch on stage at Youth Rock 2018, held at the Sutherland Entertainment Center, as a part of Youth Week.Allan Rees from 350 Eurobodalla says, “it was fantastic to see people of all ages form a choir for the recording on Monday.”

Participants in the choir sung:

We’re all in this together

We know it’s now or never

Will you think about your vote?

Come on Australia have your say?

It’s now or never have your say!

Sam says, “I feel devoted to nature and the need to protect it.”

Sam. You need to busk with your music at NAROOMA Busking on May 25. Lots of prizes to go for and use for your cause

Greta Thunberg would love to hear your wonderful song.

Perhaps send it to her.

What a beautiful young man setting such an amazing example for others.

Fantastic song and Sam is clearly a passionate young songwriter working to raise awareness of our environmental crisis..a fabulous catalyst for change!!❤

Facing a life-threatening illness well-known Eurobodalla singer/songwriter Sarah Cowan wants to make a gift of freedom and safety to a...
Read More