When the bid for an A-League side ‘mark 2’ was first mooted I was one of the first to write it off. There was a perception that it lacked energy and was doomed to fail. This is in part due to the fact that Football Federation Australia showed their hand the last time Canberra launched a campaign to be part of the competition in 2008 only to see the licence handed to the Western Sydney Wanderers.

That was a ‘captain’s pick’ if ever there was one with the Wanderers parachuted over the top of Canberra to be part of the A-League. The argument presented was that there were doubts about Canberra’s financial viability and the size of the catchment area. If nothing else, it created doubts as to whether Canberra was ever going to be taken seriously in terms of being part of the national league until our population reached a critical mass of at least 500,000.

Fast forward five months and that perception has been blown out of the water with the Canberra and Capital Region bid being one of the ten bids shortlisted for inclusion in an expanded A-League in 2019/20.

So what has changed? Why is this bid looking viable when the previous bid wasn’t?

The Community Ownership model is part of it but one of the game changers has been the apparent ability to attract funds and business interest to ensure the team is sustainable. Michael Caggiano joining the bid team was another turning point. He has the ability to leverage his existing business relationships towards a potential Canberra football team.

Before proceeding further, it is worth presenting a cautionary tale about the previous Canberra teams in the national men’s soccer league. Canberra City was part of the NSL from 1977 to 1986. There was then a hiatus until the emergence of the Canberra Cosmos in the 1995/96 season, until 2001. The Cosmos experience has had a lasting impact on many in the Canberra football community. It is possibly the reason why some were not keen to come on board initially, rather than because of the failed bid in 2008. It started with good intentions as a community model but in the end folded because of financial problems.

Towards the end, covering that Cosmos as a journalist wasn’t easy because I wasn’t sure who was in charge, as the club went pear-shaped. In fact, the team was kicked out after the 2000/2001 season only to be readmitted, but the initial decision by the governing body made it virtually impossible for the Cosmos to regain lost ground and the club disappeared before the season got underway. There was a revolving door of coaches at one stage as the club struggled on and off the field. Cosmos finished last three years in a row and failed to attract substantial crowds.

That gives you an impression of what Ivan Slavich and the original bid was up against, followed by this latest campaign. It hasn’t been easy to change the perceptions of some involved in the code that had a first-hand experience of what life was like during the latter stages of the Cosmos. They worked so hard to keep the team afloat under trying circumstances, which at times were out of their control.

Which brings us to the present and Canberra with a bold confident bid representing not just the ACT but Southern NSW.

The reason why I think Canberra needs an A-League side is not just confined to the obvious, which is the competition can’t truly call itself national unless it includes the nation’s capital. Football remains an untapped sleeping giant in this city. For one, it is the biggest sport for juniors. Imagine if you were able to convert these numbers into supporting a Canberra team in the A-League? You just need to ensure there is a pathway for juniors and there isn’t a perception that big money is going to players who are drawn from outside the ACT and district.

There is support for the code here. We have seen it in the past when there was a call to arms to attend a Socceroos’ game at Canberra Stadium in the lead-up to the last bid. Twenty thousand people turned up. There was also the success of the Asian Cup and the support received by Canberra United in the W League. 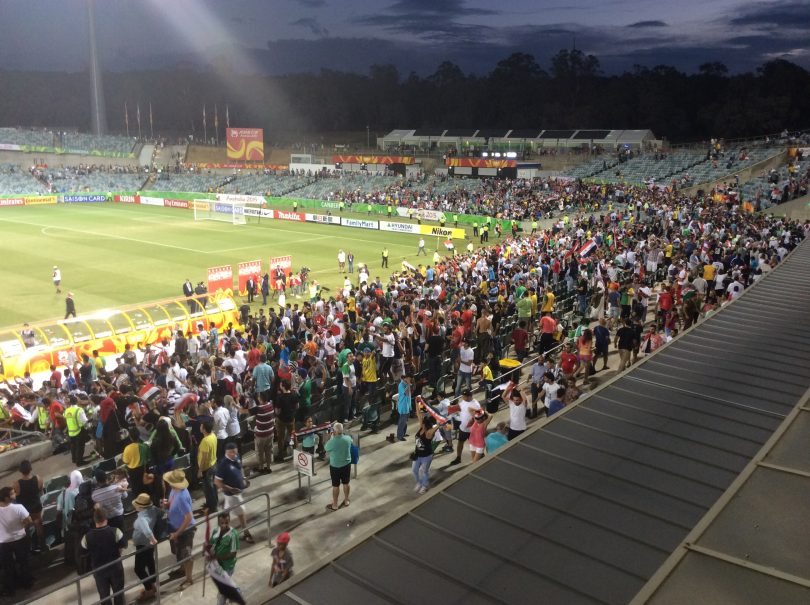 Games involving teams such as the Wellington Phoenix and the Central Coast Mariners at Canberra Stadium struggled because there was a feeling that they were only here because the ACT Government underwrote it and the people of Canberra felt as though the teams had no real attachment to the city.

The Brumbies and the Raiders should be right behind this bid as well with the Chief Minister indicating that an A-League team would improve the prospect of building an Indoor stadium in Civic.

I agree with Michael Caggiano who has stated that if all the bids are financially viable, why limit expansion to just two teams. It could also be an option to have the unsuccessful bidders putting their resources into a strong second-tier competition.

Hopefully the bid has awoken a sleeping giant.