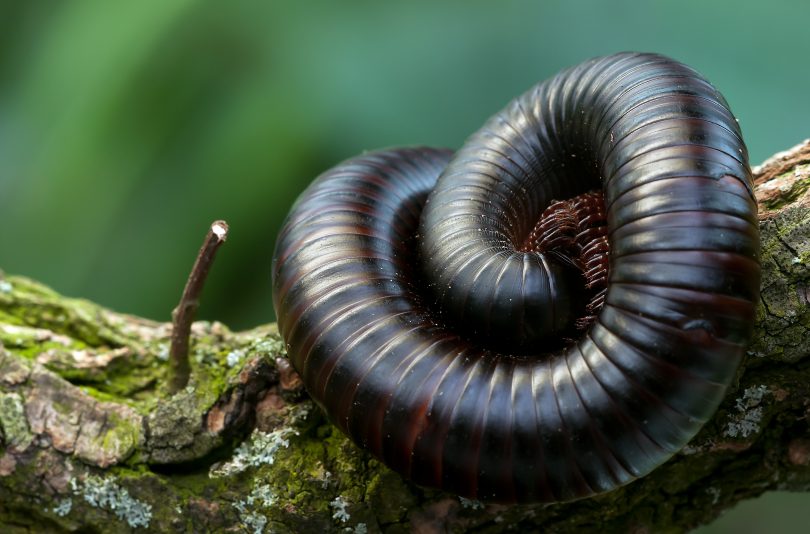 Portuguese millipedes have been wreaking havoc in Canberra and parts of NSW. Photo: Pixabay.

Have you noticed any 100-legged intruders in your house lately? If so, you’re not alone.

Hundreds of people have been sharing their close encounters with millipedes currently in plague proportions and invading homes across Canberra and the NSW South Coast, Southern Tablelands and Central West.

One resident in Yass, near Canberra, says her family has been switching off their lights at night to avoid the millipedes coming inside, while another says the creatures have been crawling all over the eaves, bricks, doors and windows of their house this week.

READ ALSO: Nature’s hairy little weed not quite what we think

Anna Marsden lives nearby in Murrumbateman and says locals have been complaining about having to sweep up the millipedes several times per day.

“Yesterday, I was at the Murrumbateman vet and they had millipedes galore,” she says. “It was the same at my Pilates studio. They seem to come into places built at floor level – luckily our house is on stumps.”

Glen Wynn owns a pest control business in the Yass Valley and he says this is the “most substantial” millipede plague he has ever seen in his career.

“Last year, we were getting a lot of calls about earwigs, then suddenly millipedes this year,” he says. “It’s very bizarre.” Helen Shaw shared this photo of millipedes crawling all over her house in Yass. Photo: Supplied.

Dr Tanya Latty, an associate professor and entomologist at the University of Sydney, and Graham Milledge, who manages the millipede collection at the Australian Museum in Sydney, believe it’s the Portuguese millipede that’s wreaking havoc down south.

“It’s hard to know without seeing the millipedes, however just from their behaviour, the tendency to form big groups is something we see more often in Portuguese millipedes than our native species,” says Dr Latty.

The Portuguese millipede was accidentally introduced into Australia and has become an invasive pest.

A wet spring and summer, caused by La Nina, has created the perfect breeding ground for the Portuguese millipede, says Dr Latty.

“Millipedes like moist environments so the rain gives them that breeding habitat,” she says.

“They also feed on decaying matter so if you’ve got a nice, humid environment, you’re going to have more millipede food around.”

With that being said, people who aren’t a fan of millipedes living inside should at least encourage them to move into their garden.

“Millipedes are really important for nutrient-cycling,” says Dr Latty. “They break down big pieces of debris into bits that can be put back into the soil and used by plants and other organisms.

“I think any invertebrate, in any large number, freaks people out, but there’s also a tendency to confuse millipedes with centipedes.

“Centipedes can be venomous and deliver a nasty bite, whereas millipedes won’t sting or bite. Their main defence is to secrete a nasty chemical compound, which can be irritating, but it’s not the same as a centipede envenomating someone.”

It’s probably the bright lights glowing outside from houses that are attracting the millipedes inside, adds Dr Latty. Nigel Buffoon picked up this millipede in Murrumbateman, near Canberra. Photo: Supplied.

“Millipedes are attracted to light so if lights are on at night, it’s possible they are coming out and honing in on the light,” says Dr Latty.

“It’s also just possible there’s a lot of them around, and a lot of houses are not very well sealed in Australia. They’re probably not going inside purposefully because there’s not a lot of food for them inside people’s houses.”

The bad news is it’s difficult to say how long the Portuguese millipede will stick around for.

“Typically, their breeding season is one to two months long and after that, they should die down in numbers as the colder weather starts to move in, but it’s so hard to predict,” says Dr Latty.

“It comes down to a real problem in invertebrate research, which is that we don’t have good data for species such as Portuguese millipedes that have these periodic outbreaks.

“So if anyone is interested in doing a little citizen science, if you can get a good photo of the millipedes and upload them to the iNaturalist app or website, that information can get used by scientists to do things such as tracking the spread of millipedes or population spikes.”

While we aren’t used to millipede plagues annually, Dr Latty says an outbreak such as this isn’t unprecedented and that, in 2002, a similar outbreak shut down the train line between Ballarat and Melbourne.

And good that millipedes aren’t as harmful as centipedes, but how do you tell the difference? Count their legs?!?

You’ll know.. we have had 2 centipedes amongst the millies and they are around 8cm long, brown, a bit wriggly when they move because their legs don’t all move in unison, and very fast.

In Quaama, we get them at this time every year. Yes, we’re on a slab and there are small gaps under some doors. Maybe there’s a few more this year — and maybe a bit bigger too. But good to hear that they’re pretty harmless.

I have HUNDREDS of these things in my house 24/7. I simply cannot get rid of them. I find a lot of them curled up and dead outside in my carport and in my house. I live in Goulburn 2580. Ive recently started seeing larger ones pop up. They drive me crazy!

Yes im in Goulburn and have the same problem they even drop from the roof onto furniture…..just everywhere

I’m in COOTAMUNDRA & thought i was the only one sweeping these up every day. They do seem to be higher in numbers but we’ve had such good wet weather. I live on a small property and thought it was because of this as well…..i think they are always here, just depends on the weather conditions if they get flooded out of their homes. I will probably need to learn to live with them knowing they are at least doing some good in my garden 🤪😪

Communities on the NSW South Coast are being urged to look out for each other on the first anniversary of...
Read More

Professional lighting illuminates the full splendour of Saints (Ss) Peter and Paul’s Old Cathedral in Goulburn as part of a...
Read More