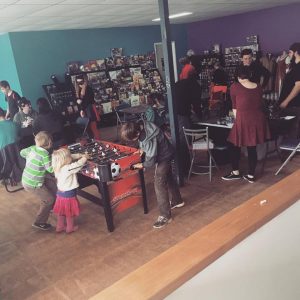 The push is on to secure the closest thing Bega might have ever had to a youth and community centre.

The Funhouse on Hill Street has been operating for just a handful of months but in that time it has become a big feature in the lives of the growing community of people around it and a ‘go to’ resource for a range of ideas and initiatives.

Thirty-one-year-old Cayce Hill is the force behind it.

Cayce moved to the Bega Valley two years ago having spent the five years prior in Melbourne, a long way from her hometown of Claremont, about 50km east of Los Angeles.

“A lot of my city friends said to me ‘you are going to be bored’ (in Bega) but the reality is so different,” Cayce says.

“There’s a lot of motivated, wonderful, creative energy flowing and Funhouse is starting to be the gravitational pull.”

Over the next 24 days, Cayce is hoping to raise a further $20,000 to keep the Funhouse going as it is now into 2017. A little over $9,000 has already been pledged via a crowdfunding ‘Pozible’ campaign. Cayce credits Peter with contributing to the early success of Funhouse by agreeing to a lesser rent for the three-level property. The aim now is to wipe that pressure for a whole year and raise the $29,000 needed.

Most of the money to get Funhouse to this point has come from Cayce’s on-site dance classes.

“I have fifty plus students and all the money they give me goes straight into Funhouse,” she says.

“But now that we are starting to get enough members using the space, Funhouse will be able to sustain itself more that way.”

Since the end of July, an eclectic mix of users has been booking space regularly within these brown brick walls just back from Bega’s main street.

Meditation, martial arts, board games, theatre , flamenco lessons, language classes, ballet, yoga, maths tutoring, men’s singing and more are part of the Funhouse program. Each session pays its way and the people connected to those varied interests become part of a community, something Cayce hopes is the start of a viable future.

While Funhouse is and will continue to be used by a wide range of ages, the needs of youth are at the heart of the next step.

“I can’t think of any place that a young person can go in Bega on a Friday night – to just hang out.” There’s always a place to crash at Funhouse

First though, breathing space is what Cayce is hoping to buy through the Pozible campaign; rent in 2017 covered so that a more strategic approach towards youth and community programs can be developed without worrying about $600 rent each week.

“From that vantage point I can see all the things that I have been keeping on the back burner,” Cayce says.

“Business incubation, youth programs, a drop-in space, really being strategic about what we as a collective, as a cooperative want to achieve.”

Before the work of her journalist partner brought her to the Bega Valley, Cayce worked with the not-for-profit youth performing arts organisation ‘Outer Urban Projects‘.

“That alone was really inspirational, but I also had friends who owned bars who were putting on hip-hop workshops, there was so much happening in Melbourne,” Cayce says.

“When I came to the area (the Bega Valley) I think I was really thirsty for that.”

Cayce says she was also surprised to learn that many locals saw Bega as a town to pass through, on your way to somewhere else – somewhere better.

“I just thought, I reckon I can change that,” Cayce says. “If there was a space where people could stop in and they knew that their friends would maybe be there or they knew that some kind of project or energy was happening, people might be more likely to spend a bit more time in Bega.”

Rather than have the Funhouse tied to a government agency or semi-corporate entity, Cayce sees greater strength in the community taking ownership of it.

The Funhouse of the future will be shaped by the people that step up to take in on.

Governance structures around a cooperative model are being built and would be developed further as financial security is deepened.

While money is in short supply, trust has been the key Funhouse commodity.

“It’s amazed me, everyone comes and is so loving and nurturing, and happy and expressive, there’s not been one bad egg,” Cayce says.

Similar values are at play in shaping what happens within the space. The steady stream of high schoolers making the Funhouse their own is a testament to that.

At a time when many well-meaning organisations are scratching their head, pondering how to engage with youth, Funhouse has nailed it, something groups like the PCYC have acknowledged and are tapping into.

“The secret is just asking them (youth) and consulting with them,” Cayce says.

“I’ve been doing quite a bit of listening and I think that has created an atmosphere where rather than me pushing my agenda, I’ve allowed for a larger youth voice.”

It’s a philosophy that informs a simple business plan for the future, one that starts with a community need or interest and then goes about developing an appropriate level of response based on what the community can afford or accommodate.

The Pozible pitch to cover next year’s rent is the first test of that, and the Funhouse of 2017 will be shaped by it.

“You all think I’m stealing”: Black lives and police interactions in Bega

Following the killing of African-American George Floyd in the US city of Minneapolis last month, many Australians are calling for...
Read More

Sharpening the focus on bushfire recovery in Bega

Initial responses to a Bega Valley Shire Council (BVSC) survey on post-bushfire needs has shown that half of all respondents...
Read More